The BBC is reporting today's fatal shooting incident in New York, US with the rather dramatic title of 'Rush-hour pandemonium in NYC' for their link to video footage of the story. I went to Wikkipedia to remind myself of the origins of the word 'pandemonium', and apparently it's from Milton's 'Paradise Lost'. It's in Hell where the demons live and is a very noisy and chaotic place (picture below). It also provides a helpful quote from the Boston 2004 Globe;
'Whenever you have violent pandemonium, there's the overwhelming possibility for panic and tragedy'.

So, one may perhaps assume that the footage would have scenes of mayhem, stampedes & the usual stereotypical panicked behaviours that are implied by such a definition. However, the aerial footage shows people calmly waiting on the edge of the Police cordon. An interview with an eye-witness does report that people scatterred and ran for cover when they heard the gunshots, but he also states that it was all over in 10 seconds when the Police apprehended the suspect, and he stayed around to see what was going on for about 5 minutes, rather than fleeing the area in terror.

To me, these accounts are better described as momentary flight from a clear and present danger, that ends once the threat is over, and terms like 'pandemonium' are neither accurate nor useful in the reporting of such incidents, and merely serve to further sensationalise crowd responses to danger. 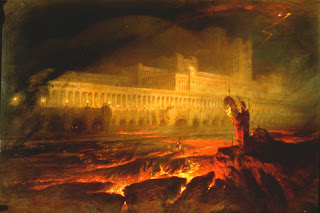