Crowd support for Team GB at the Olympics

Now that the Olympics have finished, the British media is having a field day analysing the success of Team GB, who exceeded expectations by coming 3rd in the medal table. A constant theme I heard when British medal winners were interviewed, was how they felt the crowd was a major factor in their success. It's often a common sense cliche that the home team has an advantage because of the support they get from the crowd, but in this case the successful athletes certainly feel it helped them. Early psychological research into social facilitation argued for the benefits that audiences can have on performance, but subsequent findings have argued that it can be a more complicated picture than that. What's important is not just the audience per se, as the relationship that the perfomer has with their audience is crucial. So the crowd in the Olympic stadium cheering on the team GB athletes may well have helped push themselves enough to do better than they might have done had the Olympics been elsewhere. My 5 year old daughter certainly thought that I helped Mo Farah win Gold with my support for him during the 10000m final, although I'm not sure if he could have heard me shouting at the TV in a hotel room in Dublin! For anyone who didn't see the BBC presenters getting equally excited when he won the 5000m, you can see it here.*

A recent book edited by Jetten et al (2011) provides a wealth of evidence for the positive benefits that crowds and collectives can have, and reflects a growing trend in Social Psychology away from early approaches that tended to assume that being in collectives necessarily means a deterioration in performance and decision-making. I do hope that the more positive coverage that crowds have received over the last 2 weeks results in more balanced coverage of other crowd events in future, but I won't hold my breath!


* BTW a hilarious web-site has been set up as a tribute to Mo Farah;

My favourite image is the one below- he's so scared of the Teletubbies, his name's reversed! 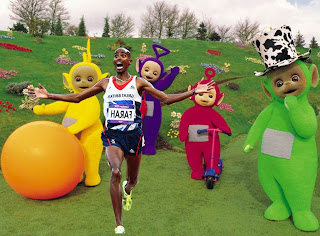