Today I attended the memorial service for the Shoreham air disaster on Shoreham Tollbridge, where there was a minute's silence at 13.20 to commemorate the time exactly one week ago that 11 people tragically lost their lives. Unsurprisingly, it was a sombre and moving experience, with hundreds of people packed on to the bridge itself to pay their respects, many more lining the banks of the river Adur, and some even attending in small boats in the river itself. In my last post I looked at how the bridge had become a focus-point for people wishing to leave floral tributes (it is one of the closest available viewpoints to where the accident happened on the A27). When I visited on the Monday after the tragedy to pay my respects there was already a significant number of bouquets covering a couple of spans of the bridge. However, today the whole of the north side of the bridge was covered in floral bouquets, football T-Shirts, photographs of the victims, toys, and various other tributes. There was even a wedding bouquet that had been left by a woman whose daughter had got married the same day of the disaster. As with my last visit there were also many touching written tributes to the victims and their loved ones, a selection of which are as follows;
"Nearly 1 week since the unfortunate news, where Shoreham Town felt really bruised... Family and friends should know, Shoreham Town is your comfort pillow'

'We may not have known you, but we will never forget you'

'It could have been anyone of us'

There were similar sentiments reported in the mainstream media, with the local Newspaper- the Argus reporting, 'Country to unite in silence for victims', and the BBC highlighting the sense of common identity and mutual support that has emerged from the tragedy, with the following quotes;
'We're all in this together'

'The local community has come together, out of tragedy, there is some goodness that comes out of it'

Finally, there have also been social media tributes, with a Facebook page and many posts on Twitter to highlight the minute's silence for the victims that was observed both locally and nationally.

To me, these different forms of tributes illustrate how disasters can bring people together with a shared sense of identity and mutual support. Work that myself and others has done into social support during and after disasters (Cocking, 2013; Drury 2012) looked at how rather than being seen as a potential problem (as they often are in coverage of mass emergencies) crowds can serve as a kind of 'social cure' in that they can bring people together to support each other in the face of adversity. I wouldn't want to downplay the unimaginable sense of pain and loss that those affected by this tragedy must be feeling, but what I saw today on Shoreham Toll-bridge reinforces my belief in the healing potential that groups can have. This is because it felt today that I was not just in a physical mass- but that I was part of a united crowd of people with a shared purpose and sense of mutual support. I hope that by seeing so many people coming together in this way can provide some comfort for those affected by this tragedy. Or to use the words of one of the tributes I saw today, perhaps Shoreham Toll-bridge will become "a bridge called love" 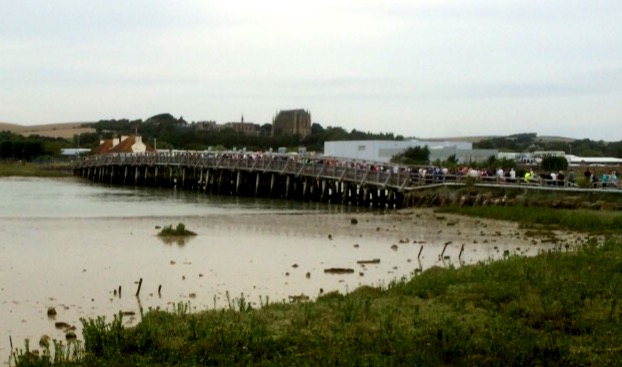 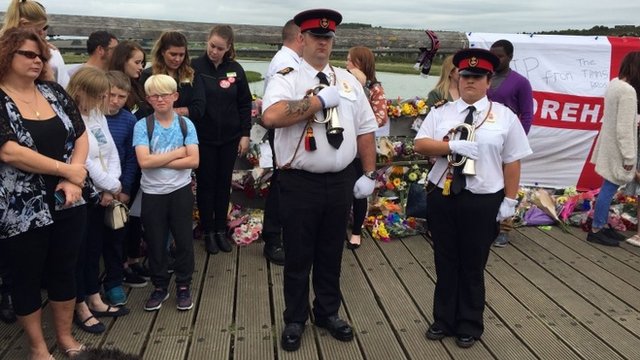 Buglers sounded the 'Last Post' to begin the minute's silence

It has been a sad weekend for Sussex, and the impact of the disaster at Shoreham air-show is still unfolding. Current news reports  are that 11 people are feared dead after a Hawker Hunter Jet crashed on the A27 dual carriageway while attempting to loop the loop during the air-show this weekend. The authorities initially feared that there could have been as many as 20 victims in total, but as I write this the Guardian is reporting that the plane has been removed from the site and no more bodies have been discovered underneath the wreckage.

Shoreham Tollbridge spans the river Adur and has become the centre for a growing floral tribute to the victims and their families (below are some photos taken earlier today by Guardian journalist Haroon Siddique). I visited this tribute today so that I could pay my own respects as I think it's important to remind oneself of the human costs involved when researching disasters and mass emergencies. It was quite a moving experience, and I was struck by the scale and content of the tributes left by the local community. In a previous blog I looked at the spontaneous social support that emerged after the death of the singer-songwriter Amy Winehouse. A similar process seems to be happening in response to the Shoreham disaster, although here we are seeing people coming together to commemorate those who were mainly ordinary members of the public caught up in a tragic accident (as opposed to a global celebrity with a loyal fan-base who was constantly in the media spotlight). Of the victims named so far, two are footballers from the local team Worthing United, and I saw some moving tributes to them on the bridge from their friends and family. The floral tribute was growing larger by the minute when I was there, as a constant stream of people arrived to pay their respects, and by the time I left, there were already a couple of hundred bouquets along with some football T-Shirts in memory of the local footballers.However, what I thought was also significant was that the majority of written tributes I saw were either from anonymous sources or from people  who didn't appear to know directly any of the victims, but still wanted to pay their respects as members of the local community, and a selection are copied below;

'Terrible tragedy to happen to our county'

'Shoreham weeps for all the victims'

'We didn't know you but we came because we care. We wanted you to know that you and your families are in our thoughts. Shoreham grieves for you and with you'

'To all who lost their lives I hope you find peace and to the families and friends my deepest sympathy and condolences. This has truly shocked our community'.

Finally, the one I thought was most touching was the tribute accompanying the drawing in the photo below which simply said;


In work I did with John Drury on the 7/7 London bombings, we found that people can come together to co-operate during mass emergencies because a common identity emerged amongst crowd members in response to a shared threat,  and we argued that people would also support each other in the aftermath of such emergencies if they could maintain such a shared identity. What we felt was significant was that the vast majority of people caught up in the crowds during the 7/7 attacks were total strangers, but they still reported a strong sense of identity which emerged from their shared experience of adversity. I believe that the growing floral tributes I saw today are also evidence of the emergent community support and solidarity that can come from strangers and I hope this is of some comfort to those affected by this terrible accident. 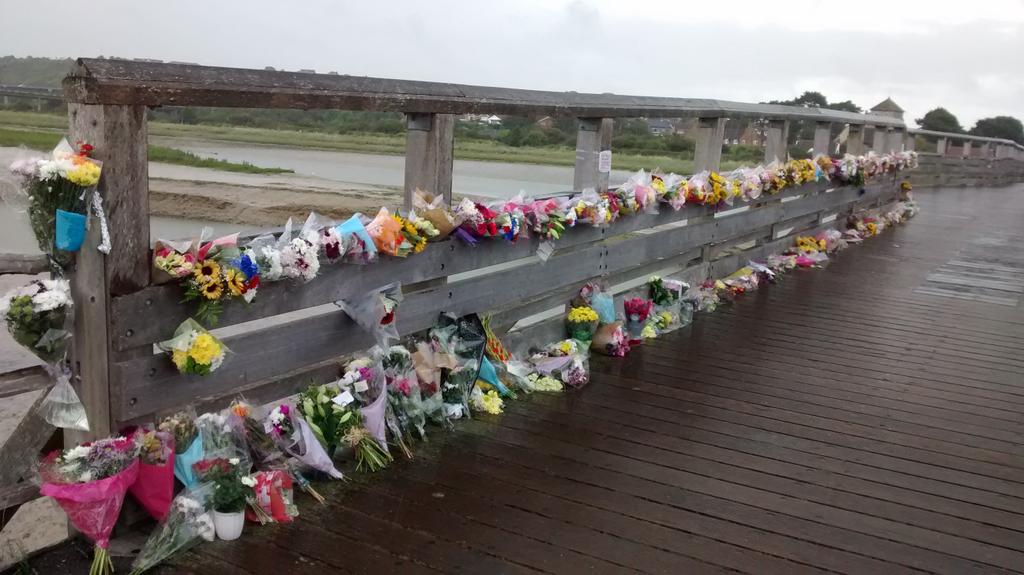 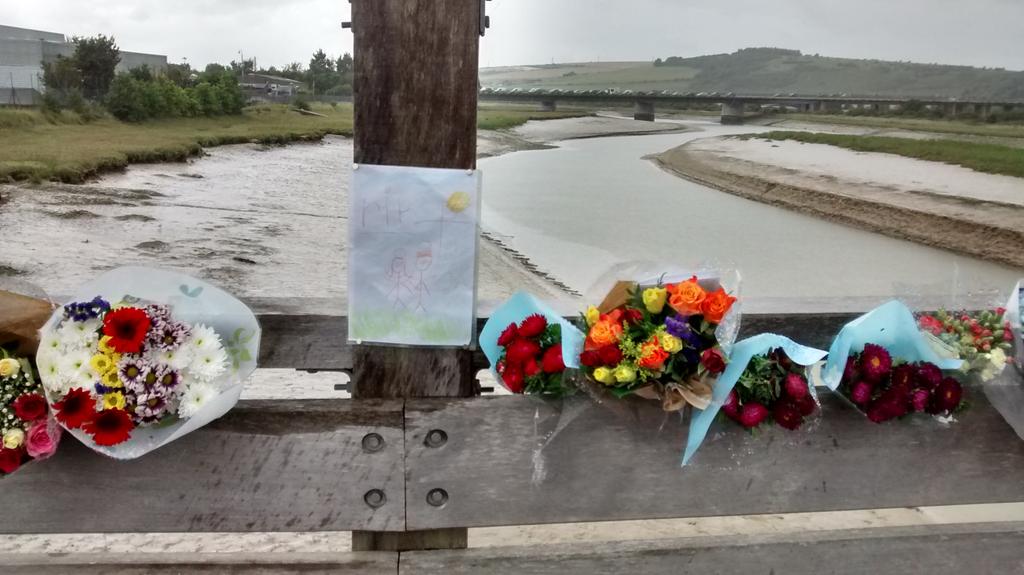 Posted by chris cocking at 12:03 No comments: