I recently found a web-site that details the historical context behind the 'Keep Calm and Carry On' posters that have become very popular in the UK ; http://www.keepcalmandcarryon.com/history/

Apparently the posters were produced by the British Government in WW2 and would have been distributed on the eve of a German invasion in an attempt to prevent mass panic in the British population. As the invasion never happened, the posters were never published, but some originals were recently found and publicly released.  They became an instant hit and perhaps inevitably inspired a whole range of spoof images, my favourite of which is below. I find them quite endearing as I think they represent a quintessentially 'stiff upper lip' approach to adversity which was part of British culture at the time. It also makes me smile to think that officials at the Ministry of Information (responsible for British propaganda during WW2) thought that if the nation was facing imminent catastrophe, seeing this poster would help the public keep calm. I'm not at all a fan of approaches that assume mass panic, but if one was going to buy into a 'panic model' (as I'm sure officials at the MoI did), then surely it would take more than a mere poster to stop people panicking! 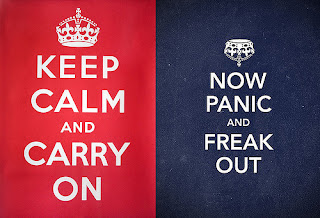