It has been officially announced today after some speculation that the UK border Agency has revoked London Metropolitan University's licence to teach and recruit non EU students, meaning that up to 2600 students now face the prospect of quickly trying to find a new course at another University, or facing the prospect of being deported within 60 days if they can't. An interview with one of the students affected reports that people are panicking over this news. I will resist entering into a semantic debate over use of the term 'panic' (as I normally do on this blog). Instead I can see why the anxiety, uncertainty, and perhaps anger that these students are no doubt feeling could be described as panic. They have been woefully let down by this decision and have every right to feel aggrieved.

It looks like this situation may have deep roots. For instance, there was a serious financial crisis in 2009 when it emerged that LondonMet had received over £36m from the UK funding council for students that did not complete, and was told to pay it back. It looks like sloppy record keeping has continued, which is the main reason the UK Border Agency has given for revoking the license, as LondonMet did not do adequate checks on the student's eligibility to study there. Therefore, it looks London Met management need to take some responsibility for this situation, as they took their eye off the ball, and have been recently focussing on schemes to privatise services at the University instead. However, it also looks like an incredibly cynical move by the government to please the right of the Tory party by claiming they are doing something to tackle immigration figures. This will have little to no effect on net immigration and merely panders to a deeply unpleasant ideological (and nonsensical) view that somehow our current economic problems will be solved by cutting down on people entering the country.

I was a lecturer in the Psychology Department at LondonMet for 4 years until October last year, and left with a lot of happy memories of the staff and students there, who were easily LondonMet's best resource. LondonMet used to advertise itself as a beacon for widening participation, and had a well-earned reputation for providing working-class kids from London with a university education that they would not otherwise get. A statistic that is often used, is that there are more Black and Minority Ethnic (BME) students at London Met, than the whole of the Russell Group of Universities (the top tier, such as Oxbridge, etc) put together. I was often inspired by the commitment and passion of the students there, both in the classroom and outside. I remember doing a lecture on crowd behaviour there the day before the 2009 G20 protests, and made a flippant comment about how I expected to see them there taking field notes. Sure enough, I spotted a few inside the Police kettle outside the Bank of England the following day. A member of the support staff in my department even found himself caught up in the Police operation against the climate camp the same evening after going down to have a look and getting friendly with a protestor!

I think both LondonMet management & the governement both need to take responsibility for this situation, but it is ultimately the students who will suffer most from this decision, which is grossly unfair, and not in their, or London Met's best interests. It also sends out a very bad mesage about the state of higher education to all the legitimate foreign students who want to come and study in the UK, and will do lasting damage to the image of British Universities.

See the London Met Unison statement on the crisis for more details, and the blog of London Met's Unison Chair.

Here's a Video of LondonMet students protesting outside the Home Office in London today, and the Education Activist Netowrk is asking people to download the following message of support, take a photo, and e-mail it to them at educationactivist@gmail.com. My cats agreed to do it after some persuasion; 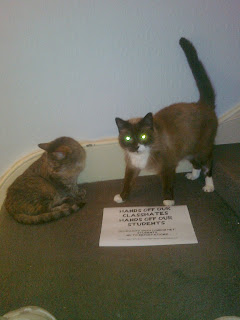