Britain is waking up to the news that London has suffered another attack that has so far seen 7 people killed and nearly 50 hospitalized (a casualty hotline has been set up for those worried about loved ones- 0800 096 1233). Shortly after 22.00 on Saturday 3rd June, a van mounted the pavement on London Bridge, and began mowing down pedestrians. Then, three men got out and began attacking people with knives in the nearby Borough market on the Southern end of London Bridge until they were shot by armed Police. This was clearly a horrific attack, and my thoughts are with all those affected. I am familiar with the area, (it is a popular place for commuters to stop for a drink before travelling onwards from London Bridge railway station), and the thought of innocent bystanders being targeted at random while they were enjoying a Saturday night out, is particularly worrying. However, as horrific as this attack surely is, there is also evidence that shows how events such as these can see a co-operative spirit emerge.

Crowd flight?
This low-tech attack appears to be the third of its kind seen in London in recent years (the first being the murder of Lee Rigby in 2013, and in March 2017 the Westminster Bridge attack), where a vehicle is used to attack pedestrians. While such incidents are truly terrifying for those affected, closer inspection of events usually shows that describing them as 'mass panic' rarely matches with the available evidence. So, for instance, footage of people leaving the scene last night shows an orderly evacuation, where they are evacuating with a degree of haste, but this is far from headlong flight (some people are not even running), and I can see no evidence of selfish behaviour (such as pushing others) or people falling over in the rush. This fits with crowd responses to the truck attack in Nice in July 2016, and with research that I have done (Cocking 2013a) into crowd flight.

Bystander responses:
Reports are coming in of the speed and efficiency of the response by the emergency services, which by all accounts was amazingly quick. For instance, the London Ambulance Service reports that they were on the scene within 6 minutes, and deployed over 80 medics to help the injured. The attackers were also shot dead within 8 minutes of the start of the incident. However, as with such events, there is always a delay between the incident beginning and the emergency services deploying on the scene (no response can ever be instantaneous), and so in the minutes (or even seconds) before they arrive, we often see heroic acts by bystanders as well. So for instance, in an interview with an eye-witness, he describes his efforts to warn people what was happening and how he also intervened by throwing things at the attackers. I have also heard reports on Radio5 Live that people were directing Police to where the attackers were in Borough market, and an eye-witness talked about how people reacted; 'everyone seemed to adapt to it very quickly and respond to it as it happened'. On a broader level, in the aftermath of the attack, the hashtag  #sofaforLondon appeared on social media, as Londoners began offering a space to stay for anyone unable to get home after the attack. People are also using the Facebook safety check service to reassure others that they are OK.

I believe that all these examples illustrate well the concept of collective resilience, something that emerged from research I did with John Drury (see references below) into mass emergencies, whereby spontaneous co-operation quickly emerges among those affected, and the idea that people will be too shocked or 'panicked' to help each other just isn't backed up by what happens on the ground. So, bystanders in emergencies could actually be seen as a form of 'zero-responders' (Cocking 2013b) that could help strengthen the official response to such incidents. I hope that this can help show that a positive aspect of our shared humanity can emerge from such awful attacks, as people come together to help others in times of need. 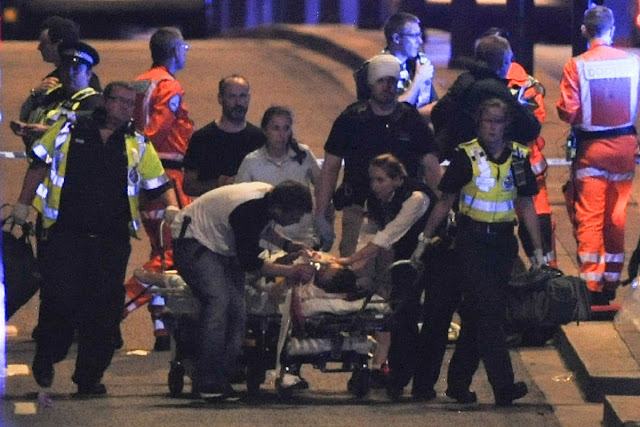 Responders tend to the injured

Drury, J. and Cocking, C. (2007). The mass psychology of disasters and emergency evacuations: A research report and implications for practice.
http://www.sussex.ac.uk/affiliates/panic/Disasters%20and%20emergency%20evacuations%20(2007).pdf