I was at the Notting Hill Carnival today, which was held this year in the shadow of the Grenfell Tower fire tragedy in June 2017. For those unfamiliar with the geography of Notting Hill, this is not mere hyperbole, and from where I watched the carnival go by on Ladbroke Grove, the gutted Tower block was clearly visible to carnival goers. This made it a more sombre and reflective event than previous carnivals I have experienced (I grew up in West London & so have been a frequent visitor to the Carnival over the years), but from what I saw, the collective support offered by the local community and carnival goers shows how people can come together to support each other after such tragedies.

Locals had asked that visitors to the carnival didn't take photographs of the Tower and to respect people's privacy around the estate where Grenfell Tower is. Therefore, my focus in this post is on examples of collective support afterwards, rather than the tragedy itself & I have copied below some of my photos that I think are good examples of such collective support. In a previous post I looked at how the local community came together to support each other after the Shoreham air disaster in 2015, and how a nearby bridge became a focus of messages of support. A similar thing has happened in the area close to Grenfell Tower (I also noticed this on a previous visit to a local church in July), and a popular image of  Grenfell as a tube logo has also emerged,with people wearing T-shirts with this logo in solidarity at today's carnival. 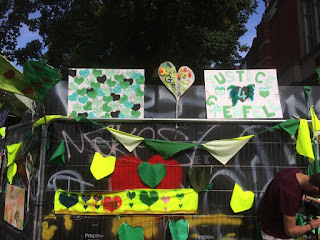 Messages of support on Ladbroke Grove

I also noticed some interesting dynamics in the crowd behaviour at the carnival. For instance, the area closest to Grenfell Tower was designated as a quiet zone for reflection, and at 15.00 on both carnival days, there was a planned minute's silence. I did wonder beforehand how easy it would be to organise a minute's silence in such a large carnival crowd, but in the area where I was standing, word went around from about 14.50 onward that there was going to be a minute's silence. The crowd pretty much universally respected this & fell silent along with the emergency services personnel who were stationed there. The floats also fell silent when they passed the quite zone, and some had messages of support along the side The few people that didn't realize what was going on were told by others to be quiet & quickly did so. Once the minute was over, there was a spontaneous round of applause and yellow balloons were set off from local flats. This was quite a powerful experience to be part of and I felt this was a good example of the potential strength of unity that crowds can have in showing positive emotion & collective solidarity. This all fits with previous work I have done with John Drury on community resilience after disasters, where we found that people can come together and support each other much better than is often expected of them (see references below). 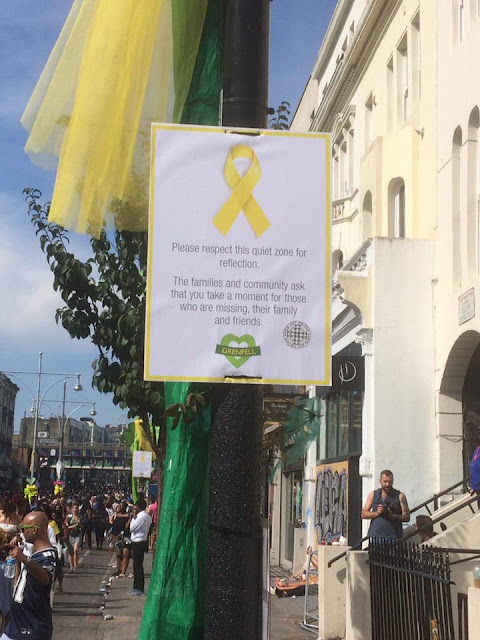 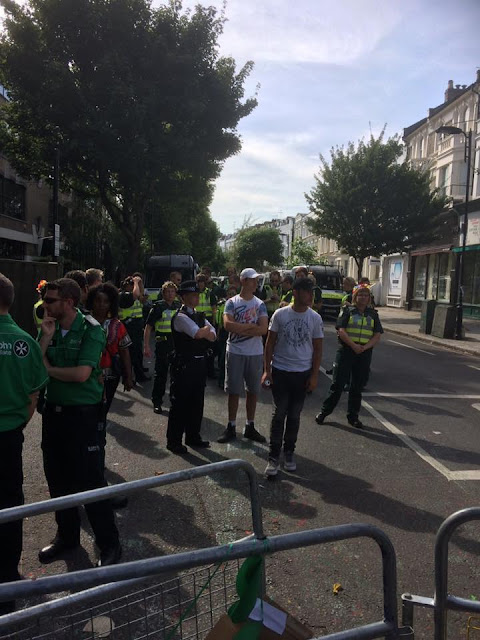 Conclusion:
The Grenfell story is far from over and the survivors & victim's families will need ongoing material and emotional support in their fight for answers and justice (the Red Cross are taking donations & support for those affected can be accessed here). I also wouldn't want to make any claims that such a journey will be easy or without setbacks. However, I hope that the examples of collective and community support that I saw at the Notting Hill carnival today, could help form a vital part of the collective healing process that is so desperately needed in this area of West London. 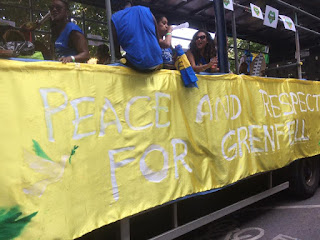 Messages of solidarity on a float