The city of Manchester and the whole of the UK are reeling in shock in the aftermath of the  murderous attack on the Manchester Arena after the Ariana Grande concert on 22/4/17, with 22 confirmed dead and 59 injured. As I write this, the UK terrorist threat level has been raised to its highest level, 'critical' (meaning another attack may be imminent), and soldiers have been ordered to support the Police on the streets to free up more armed officers. It is difficult to find the words to describe such a horrific attack that was clearly designed to be as shocking as possible and divide communities in its wake. I will show in this blog how I feel that such dark events can bring people closer together, both during the incident and in its aftermath. As is common with media coverage of such incidents, the words 'panic' and 'stampede' are freely used to describe the crowd response, suggesting that the people affected behave irrationally. However, work that myself and colleagues have done in this area has found that the reality is often more complex, with people behaving in ordered ways that are governed by the context in which they find themselves.

'Stampedes?'
From what I have seen of crowd responses in the Manchester Arena, I think it is problematic to simply describe people's behaviour as a 'stampede' (something I have looked at in previous blogs on crowd flight).  It appears that as the concert was finishing, a lone suicide bomber walked into the foyer and detonated his device. The initial response to the blast appears to have been an eerie silence, then people began screaming once they realised what had happened, and then they fled rapidly from the venue. Mobile phone footage from inside the venue and the train station shows the crowd flight after the blast, and while you can see a degree of urgency amongst people leaving, there's no evidence of people behaving selfishly. Research I have done into crowd flight (Cocking, 2013) has shown that it is misleading to describe such incidents as a 'stampede' because it implies that people are behaving like animals with no consideration for their fellow human beings. Instead, people tend to help each other out when they are able, and I have not yet seen any footage of people behaving selfishly (eg pushing people or trampling over others). I'm mindful that it is possible that fear in a crowd composed largely of young people could be greater than in a crowd of adults (which is where I have done most of my research), but I have not yet seen any evidence that any such increased fear significantly increases incidences of selfish behaviour.

'Panic'?
'Panic' is another word that is commonly used to describe such incidents, both by the media and in eye-witness accounts of the incident. Now, I'm not claiming that this incident was anything other than utterly horrific and terrifying for those involved, especially because there were many young people and children at the venue (and for some it was possibly their first gig). However, to describe such events as 'panic' doesn't fully explain the full complexity of what goes on, and like the term 'stampede' it implies that people are behaving irrationally and/or selfishly, when the evidence suggests otherwise. So, within the incident, I heard reports of people grabbing their relatives and running, forming human chains to help wheelchair users, and worried parents going against the crowd flow to enter the venue to find their children. There is also a moving interview on Channel 4 news where two parents describe how they looked after an injured child before they had found their own children. I would say that all of these examples are the opposite of 'panicked' behaviour, and instead show how people co-operate with each other (often to help complete strangers) in emergencies. 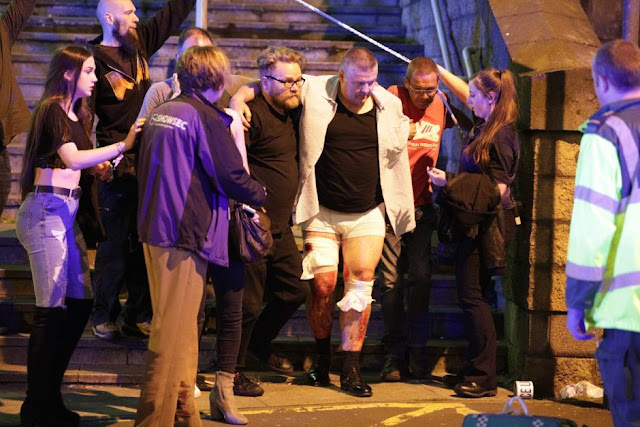 Collective Solidarity:
Much has been made of how people have come together in the aftermath of this tragedy, and I have heard journalists and politicians refer to the 'spirit of Manchester' and how such a tragedy will bring people together.  This fits with the the work I have done with John Drury that shows a sense of collective resilience can emerge from such incidents. So, for instance, I saw reports of people giving out water to victims, queuing up to donate blood, taxi drivers not charging for fares, people organizing lifts to get fans back to Liverpool, and one bystander leading 50 children to safety and arranging for a local hotel to put up those who couldn't get home. This collective solidarity also continued after the immediate attack, with a vigil in Manchester's Albert Square the day after the incident, and a planned rally by the far-right English Defence League (EDL) in the Arndale Centre was shouted down by Mancuniams. Now I accept that there could be a degree of political and media rhetoric here, (as a clear aim of such terrorist attacks is to divide communities), but the numerous examples of people spontaneously showing such collective solidarity, leads me to conclude that this is a real phenomenon above and beyond any journalistic hyperbole.