France is in mourning after 129 were killed and over 400 injured after Friday's attacks at multiple locations throughout Northern Paris. There has been blanket coverage of these events elsewhere, and the situation is developing continually, so I will limit this entry to focusing on a couple of significant phenomena that have emerged so far: firstly, crowd responses during one of the incidents and in the immediate aftermath; and secondly the wider solidarity and social support that has been shown in response to these horrific attacks.

Bataclan concert hall
The incident that saw the worst loss of life was the attack on the Bataclan concert venue while the American band the 'Eagles of Death Metal' were playing, with 89 killed and almost 100 injured- some critically.  This was clearly an unimaginably horrific experience for those who had merely gone out expecting to see a rock concert. However, within this carnage, there were also examples of the amazing humanity and cooperation that those affected showed towards each other, which yet again contradicts the notion within media reporting that 'mass panic' is the dominant response in such emergencies. For instance, BBC coverage of the incident describes how people were led to safety via an emergency exit by a security guard (although the article still uses the term 'panic');
'Amid the confusion and panic, a security guard shouted for everyone to follow him through an emergency exit to the left of the stage'
Around 50 people also escaped by evacuating onto the roof of the venue, and a male survivor interviewed on the BBC's Newsnight on 16/11/15 (about 26 mins into clip), reports how he and a number of others co-operated to escape through a sky-light from the venue. Interestingly, he illustrates how social norms endured as he says that 'we tried to be gentlemen, so it was ladies first', and also describes how others showed great courage in helping others escape. Finally, there is a very moving (but also quite distressing) Facebook post from a survivor who also posted a photo of her blood-stained top (see below) that went viral and has so far received nearly 3 million likes and over 800,000 shares. In it she details the support and compassion that fellow survivors displayed to each other during the attack & how passers by helped the victims in the aftermath, and is consistent with work I did with John Drury  (Drury et al, 2009) into how people tend to behave during life-threatening emergencies.

False alarms & 'panic' in the aftermath?
There has been footage circulating on-line of instances of crowd flight on the streets of Paris that have happened since the attacks, leading to further media speculation of 'panic' and 'stampedes'. For instance, the Daily Telegraph shows a montage of 3-4 different video clips of crowd responses to an apparent false alarm after firecrackers were heard going off near the Place de la Republique. While there is clear evidence of rapid crowd flight in these clips, I would argue that this flight is a logical response to the very credible fear among people that there could have been further attacks. Furthermore, while the video shows people running and some even cutting across the candles and floral bouquets laid out in honor of the victims, no-one appears to be pushing other people (and there is certainly no evidence of anyone being trampled), and in a later clip, waiters  are beckoning in people from the street to take cover in their restaurant, and helping in as many people as they can- an evidently co-operative act and perhaps even at some risk to their own safety. This all fits with previous work I have done on crowd surges during riots (Cocking, 2013) and a blog on the recent disaster at the Hajj in Saudi Arabia, where I  argued that such situations should not be called 'stampedes', as the term is too pejorative, and is not supported by detailed study of what actually happens.

Shared unity & solidarity
In the broader aftermath of the attacks, there have been numerous acts of global solidarity and support offered to the victims. For instance, various bands have called off or postponed planned concerts as a mark of respect, with Bono from U2 demonstrating a shared sense of unity with the victims at the Bataclan concert hall;
"It's very upsetting. These are our people.This is the first direct hit on music that we've had in this so-called war on terror, or whatever it's called."
This sense of shared identity was also manifested in a tribute to one of the British victims, Nick Alexander, (who was selling T-shirts at the concert) in an Observer article, entitled ' we are all the road crew'. Various landmarks around the world were also lit up with the colours of the French Tricolore flag to show unity and solidarity with Paris, with some holding placards with the message 'we are all Parisians'. A similar thing happened in the aftermath of the Charlie Hebdo attacks this January, when #JeSuisCharlie became the most popular hashtag in Twitter's history. Again this fits with previous work that has been done into how exposure to adversity can bring people together. For instance, in an article I wrote with John Drury into the July 7th 2005 London bombings brought people together in their immediate aftermath, but there is also a concern that such attacks could increase Islamophobia and polarize communities in France and further afield. However, so far that does not appear to be happening, and when a demonstration was held in Lille, against the Paris attacks, a small group of far-right activists with an anti-Islamic banner who tried to join were chased off by the crowd. As events unfold, we will no doubt find out more about all these incidents and their consequences, but I hope that the examples of unity and solidarity we have seen so far can serve in whatever small way as a counter-balance to the awful scenes Paris has had to endure and not allow such murderous acts to allow intolerance and extreme ideology of any form to prevail. 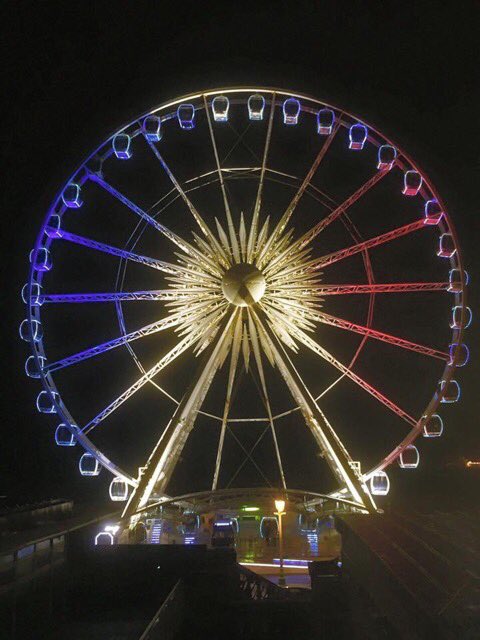 Brighton Eye lit up with the colours of the Tricolore

References:
Cocking C. (2013) Crowd flight during collective disorder- a momentary lapse of reason? Journal of Investigative Psychology & Offender Profiling, 10 (2) p.219-36.
Cocking C & Drury, J (2015) As we remember 7/7, it’s time we learned to trust the crowd. The Conversation, 3/7/15. https://theconversation.com/as-we-remember-7-7-its-time-we-learned-to-trust-the-crowd-44210
Drury, J., Cocking, C., & Reicher, S. (2009). Every one for themselves? Understanding how crowd solidarity can arise in an emergency: An interview study of disaster survivors. British Journal of Social Psychology 48.