Today saw the worst tragedy at the Hajj in Saudi Arabia for 25 years, as 717 Muslim pilgrims were killed and nearly 900 injured in a crowd crush while on their way to the holy sites of Mecca. Information is still filtering through, but it looks increasingly like a fatal crush occurred when two large groups of pilgrims converged from different directions onto one road, known as 204 Street (see the following map for more details). As a result of this tragedy, the Saudi King has ordered a safety review of the pilgrimage. This safety review is of course welcome news, but I also worry that the coverage of this disaster still draws too easily upon outdated notions of crowd behaviour- namely the use of the term 'stampede' to describe what happened, and that the media must stop using the term to describe such incidents.

Rushing to use the term 'stampede'?
As soon as news started breaking in about this tragedy (about 10.00 GMT on 24/9/15), the UK media began using 'stampede' in their headlines (and have largely continued to do so, ever since), which rapidly launched myself and others onto Twitter to take issue with the use of the term. In a blog from 2011, John Drury looks in detail at why the term 'stampede' is problematic when describing emergency behaviour, because it implies selfish and/or animalistic 'panicked' behaviour by those affected. More recently, in a blog after the Shanghai crowd tragedy on 13/12/2014, I argued that calling such tragedies as stampedes is rarely supported by later detailed examination of events. For instance, people rarely deliberately trample over others in crowd disasters (as is implied by the term 'stampede'), with victims more likely to die of compressive asphyxia because of dangerous levels of crowd density. Furthermore, the term 'stampede'  could also serve to deflect blame away from possible crowd management failings and onto the victims themselves (e.g. "crowd 'panic' causes disasters"). This point of prematurely attributing blame was addressed by John Drury and Keith Still, in interviews for the Telegraph newspaper today, where they were both critical of the apparent attempts by some members of the Saudi authorities to blame crowd members for the tragedy before the full facts were known. For instance, soon after the disaster happened, the Saudi Health Minister was reported as already speculating that the tragedy was caused by crowd members ignoring official advice;

'If the pilgrims had followed instructions, this type of accident could have been avoided'


Conclusion:
The terrible scenes in Mina show the dangers that can exist in large crowds. However, I believe very strongly that it is possible to safely manage large numbers of people, and that tragedies such as the one seen today are not inevitable. However, when such tragedies do occur (and they are mercifully rare), I don't think it helps to describe them as 'stampedes', as it is such a loaded term, and does not accurately describe what actually happens in such incidents. Furthermore, it could also serve to unduly influence any future investigations (such as the safety review that has been announced). Therefore, I believe that this is not a simple semantic issue of language use, and if we are going to improve safety at large crowd events, using outdated  terms such as 'stampede' when things go wrong, will only get in the way of trying to create safer crowd experiences for everyone involved. 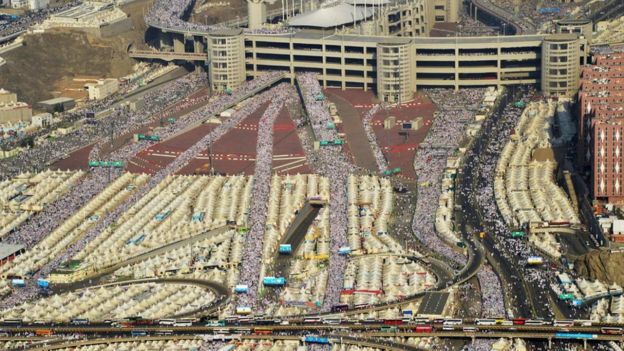