The recent evacuation of British Airways flight BA2276 that suffered an engine fire as it began take-off at Las Vegas airport has caused some controversy, as illustrated in a BBC article about the incident. It focuses on the chorus of disapproval circling around social media (two examples are copied below) in response to reports that some passengers delayed their own and others' evacuation as they retrieved their hand luggage (in direct contradiction to the usual instructions for evacuation procedures). Such criticism has been countered by the Guardian journalist Jacob Steinberg who found himself on this very flight, and seems to be excusing this behaviour because people 'panicked';
'There were even some passengers who tried to get their luggage out of the overhead lockers. I’ve subsequently seen some criticism of them on Twitter but if you weren’t there, how do you know how you would have reacted? People do odd things when they panic'.
I think this incident raises some interesting issues about how people behave in emergencies. First of all, it's worth highlighting that not all passengers behaved in this way and took their hand luggage with them, so it was not action done by the group as a whole. For instance, a British passenger interviewed said that he followed instructions to leave his luggage on the plane (and reports that others also did the same) and also that he wasn't personally inconvenienced himself by others taking out their luggage (although he saw people outside the plane who had obviously done so). Furthermore, Jacob Steinberg also points out that others on the plane voiced their disapproval when it happened, so it was by no means a generally accepted norm of behaviour;
"There were certainly shouts for people not to do it when they opened lockers"

Secondly, while people delaying their own (and possibly others') evacuation to get their luggage out during plane fires is not particularly sensible or co-operative behaviour, I would say it's not necessarily 'panic' either. This is because the classic view of 'panic' behaviour would imply that people would rush blindly to the closest exit with complete disregard for their possessions (or other people in their way) and there doesn't seem to be any evidence that this happened during this incident. Rather than 'panicking' I would suggest that focusing on retrieving one's belongings may be an example of the dissociative behaviour sometimes displayed by individuals in emergencies to help them ignore the seriousness of the situation- something suggested in a report I wrote with John Drury looking at mass emergency behaviour (Drury & Cocking, 2007, p.8).

Finally, such behaviour is not always seen in plane evacuations, and I think it's worth drawing some historical comparisons with more serious plane fires that have ended in tragedy. For instance, the Manchester airport disaster, on August 22nd 1985, killed 55 people after one of the plane's engines caught fire on take off. The air accident report concluded that most of the fatalities occurred because of delays in evacuation, since people who were not able to evacuate the plane immediately became quickly incapacitated by the toxic smoke that filled the cabin and died from smoke inhalation. However, the delays in evacuation were largely due to passengers' difficulties in being able to see their way through the smoke and also in getting the cabin doors open, and one of the surviving cabin staff reported that passengers were not carrying any 'noticeable or unacceptable hand baggage' p.43. Therefore,perhaps the less serious nature of the incident at Las Vegas airport (mercifully, everyone survived the evacuation of flight BA2276) meant that passengers felt less of a sense of urgency to evacuate than passengers would have during the Manchester airport fire, and so they thought it wouldn't be a problem if they paused to get their luggage .

Conclusion:
I'm not saying that passengers delaying their own and others' exit during plane evacuations to retrieve their luggage isn't problematic (I'm getting on a plane tomorrow afternoon and will make sure my hand luggage stays put if we have to evacuate!), but I would resist attempts to describe such behaviour as 'panic'. This is because trying to excuse such behaviour as 'understandable in the circumstances because people can't help themselves' doesn't really help us tackle the problem. Perhaps such behaviour could be better explained in terms of a social dilemma, which is something I have looked at in previous blogs. This is because what may be perceived to be in the individual's short term interests (to evacuate with all one's possessions) may not be in the group's interests (as it could delay others evacuating). So I would say the crucial thing is to try much harder to convey the message to air travellers that it's in everyone's collective interest to act co-operatively during evacuations, and that delaying your exit to retrieve your duty free from the holdall above does not serve the collective good (and could end up risking your own life as well). Furthermore, if social norms develop where such behaviour is not considered appropriate and other passengers routinely express their disapproval to those who do it, we will hopefully see less of it in future plane evacuations. Failing that, I have seen some on-line comments suggesting that overhead lockers should be electronically locked until everyone has safely evacuated during emergencies! 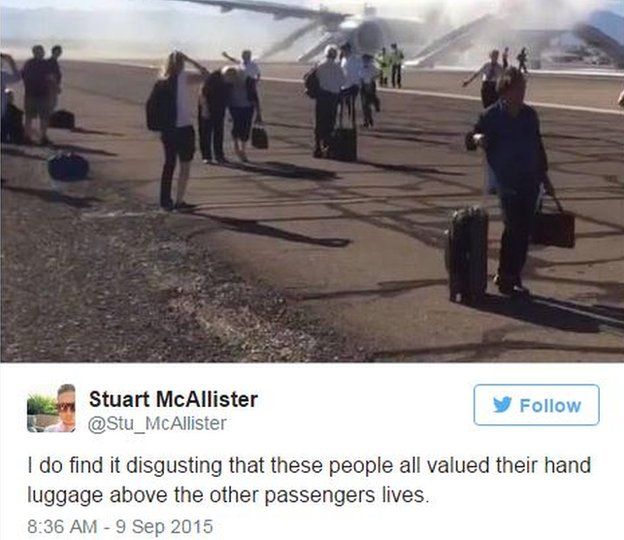 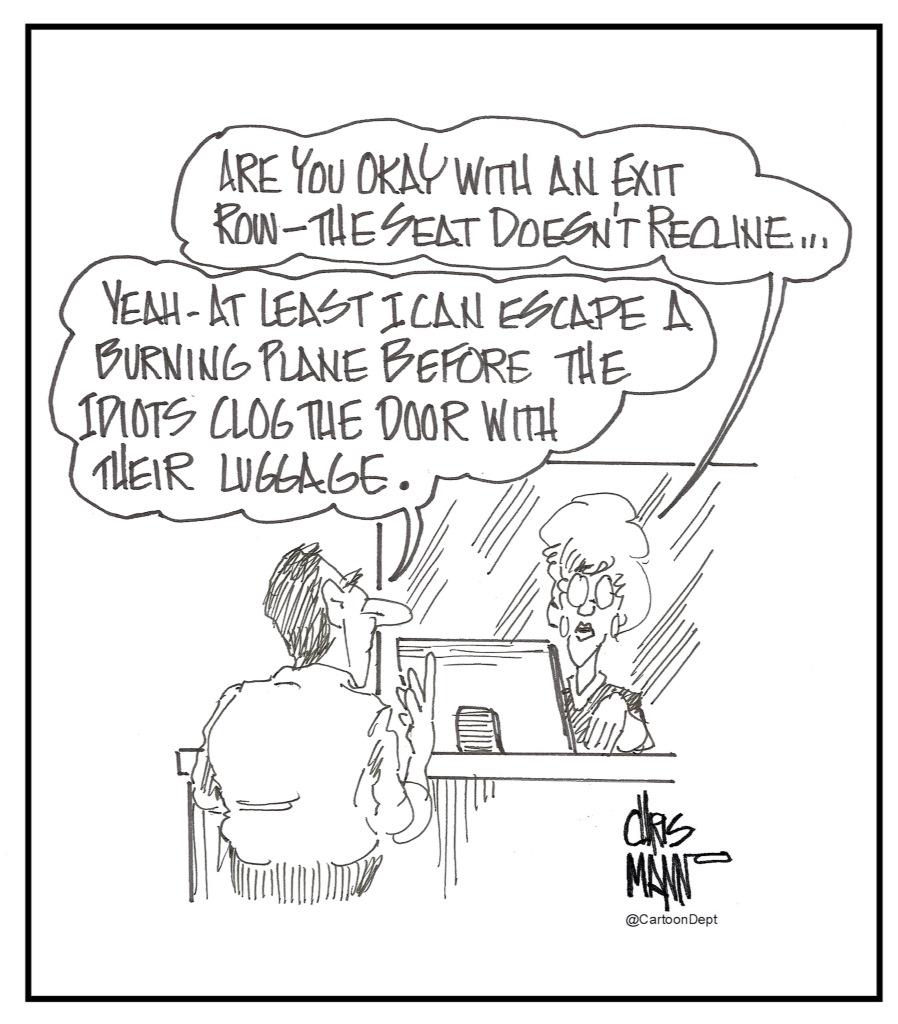