Today (28/2/14) saw the final day of  the public consultation  process into the possible introduction of water cannon into British policing that was called by the Mayor of London's Police and Crime Committee (MOPAC). There have been interesting developments in this area since my previous blog entry that coincided with the release of my report, where I detailed my concerns about its possible ineffectiveness and the counter-productive effects that deployment and use of water cannon could have. Since my report went public, it has been widely disseminated via social media (despite no mainstream media interest as of yet) which has so far included over 100,000 tweets circulating the link to the report. There has also been a broader engagement in the general debate about water cannon. So thanks to all of you who showed an interest, and some of the highlights are detailed below.

Firstly, the public meeting to discuss the issue at the Greater London Assembly on 17/2/14 was well attended, and from watching the webcast, it seemed quite lively at times! (I was unable to attend as I had tickets to see Brighton play in the 4th round of the FA cup). One of the speakers from the floor cited an extract from my report about how the use of indiscriminate weapons such as water cannon could create a self-fulfilling prophesy of disorder (see p.10-11 of the published transcript), and Dietrich Wagner (the German pensioner who was blinded by water cannon in 2010) spoke movingly about his experiences and why he was opposed to its introduction. The police also showed their own CCTV footage of four different instances of serious disorder in London over the last 15 years, to provide examples of where they may have used water cannon had it been available, although the responses of the audience to each clip suggest that they were not convinced by these arguments.

There have also been interesting political developments in this matter. For instance, the London Assembly Police and Crime Committee issued a report arguing that the the Metropolitan police have not made a convincing case for the introduction of water cannon, and takes issue with how the consultation process has been conducted. Baroness Jenny Jones who is a Green member of the London Assembly has also been vocal in her opposition to water cannon, and sets out her case quite coherently in a seven page letter to the Mayor of London (Boris Johnson), sent on 24/2/14. In it, she takes issue with numerous specific points that she does not feel have been adequately addressed, and that the limited time-scale of the consultation process means that there may not be time to address them. She also very kindly cited my report;

"I have read the submission by Dr Chris Cocking...based on his research into crowd behaviour and public order policing. I feel his submission raises some very pertinent questions and concerns which have not been addressed by the Met[ropolitan Police] during this engagement and because of the brevity of the engagement they will not be addressed. I should like to see the Met responding to the concerns raised and explaining to the public how these concerns can be addressed before proceeding." p.5

The no to watercannon campaign group have also prepared a parliamentary briefing for circulation to MPs that details their opposition to the proposal to introduce water cannon, and highlight the concerns I raised about the risk of people developing hypothermia if they are soaked with water cannon and then confined in police 'kettles' for long periods of time in cold weather. Finally, there is a House Of Commons Early Day Motion (currently signed by 16 MPs) opposing the introduction of water cannon, with plans to raise questions with the Home Secretary about this matter on 10/3/14.

Conclusion:
It would be conceited of me to imply that my report on its own can influence decisions in this matter, and many other people have raised valid points in their opposition to water cannon far more eloquently than I could ever hope to do! However, I do feel proud to be at least a small part of a growing movement to raise concerns about the possible effects of the introduction and use of water cannon. Time will tell how effective these efforts have been, but I believe that a very clear and coherent case has been made arguing why such a blunt tool should not become part of British policing. Furthermore, if the decision is made to introduce water cannon, I would argue that this decision will have been made for short-term political reasons (rather than evidence-based reasons), and that such decisions are usually poorly made and deeply regrettable in the long term. 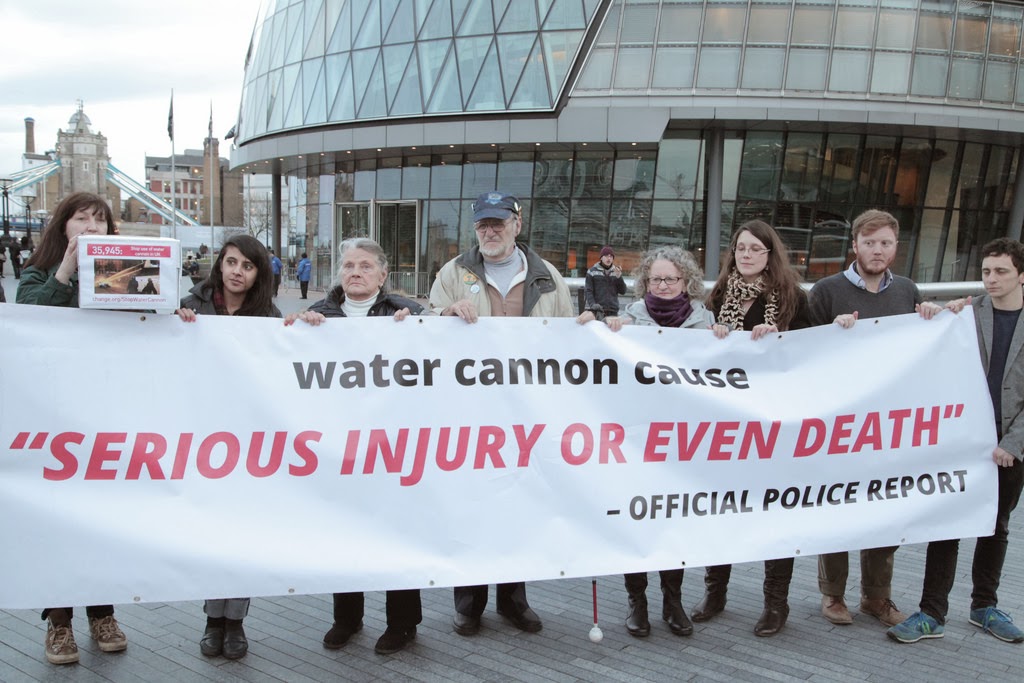