There is currently an ongoing public consultation process called by the London Mayor’s Office for Policing And Crime (MOPAC) into the possible introduction of water cannon. A report I wrote in response to this consultation (to coincide with a public meeting called for 17/1/2014 at City Hall to discuss the issue) can be downloaded here, and a copy of the Press Release that was issued by my University is copied below. It will probably not come as a great surprise to regular readers of this blog that I am not in favour of the introduction of water cannon, as it is an indiscriminate public order tactic that will probably be ineffective and counter-productive in that it will be probably result in increased crowd conflict rather than less.  I have also yet to see any consideration of the possible medical effects of spraying people with water cannon and then leaving them confined  for long periods of time while soaked to the skin in possibly cold weather conditions (which seems a distinct possibility given the public order tactics commonly used in British policing). Therefore, I'm really worried that future protests in Britain could see multiple casualties from hypothermia if water cannon is used and then people are kettled afterwards.

For more information, see the No to water cannon campaign that has been set up against the proposals. Through crowd sourcing, they managed to raise over £1,000 so that a pensioner from Germany who was blinded by water cannon in 2010, can come and speak at this meeting about his own experiences at the public meeting on Feb 17th. If you read this before the public meeting (hosted by the Metropolitan Police Service and the Deputy Mayor at City Hall at 19:00 on 17 February 2014 in Room 5) please feel free to download and cite my report at it. If not, the public consultation is open until Feb 28th 2014, and you can send comments on the proposals to; watercannonengagement@mopac.london.gov.uk. 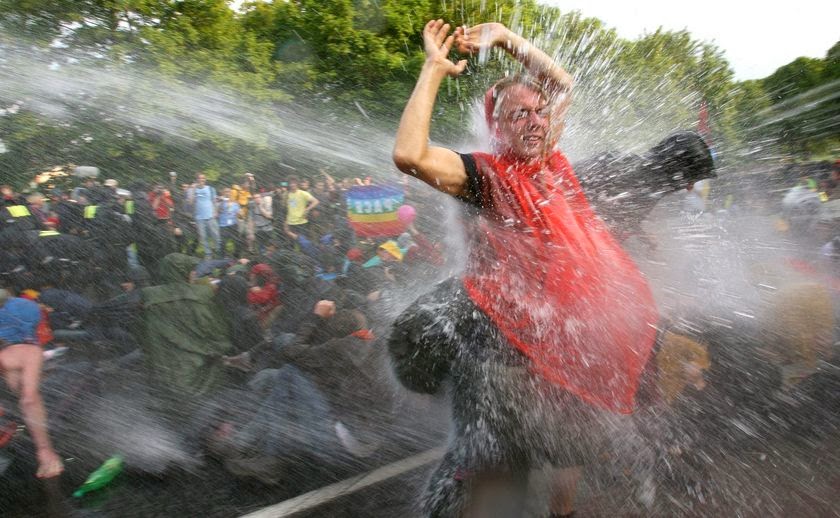 Dr Chris Cocking, a Senior Lecturer at the University of Brighton today released a report on the possible psychological and physical effects of the use of water cannon. His report was done in response to a public consultation process called by the Mayor of London’s Office on Policing and Crime (MOPAC)[1], after plans were announced by the Metropolitan Police Service (MPS) to purchase water cannon and hold them as a national asset that could be shared with other police forces in the event of disorder in British cities similar to that seen during the 2011 riots. This report has also been released to coincide with a special public meeting hosted by the MPS and the Deputy Mayor at City Hall at 19:00 on 17 February 2014 to discuss the issue.

In his report, Dr Cocking argues that the introduction of water cannon into British policing would be indiscriminate, disproportionate, and largely ineffective against many of the behaviours seen during recent disorder (such as the widespread looting in the 2011 riots). Furthermore, water cannon could even prove to be counter-productive, as its appearance and/or use in potentially volatile situations could increase the risk of disorder happening, or escalate it once it begins. Finally, there could also be serious and possibly fatal medical consequences (such as hypothermia) if protestors are soaked by water and then contained behind police cordons for long periods of time in cold weather conditions (as could happen if the ‘kettling’ tactic is used in conjunction with water cannon).

Dr Cocking said;
‘This report is my attempt to illustrate my concerns about the possible implementation and use of water cannon, and I also hope that it can be part of an attempt to shift the argument back to a more evidence-based debate over the effectiveness and/or appropriateness of the various tactics suggested to deal with the recent urban disorder seen in Britain in recent years’

He also concluded;
‘The use of water in disorderly situations is best left to the emergency service that has the most expertise and knowledge in this area (the Fire and Rescue Services), and that water jets should be left to targeting fires, not used to attack people in the misguided belief that it will help maintain ‘law and order’.

The report will be available to download shortly via the following link;
http://www.brighton.ac.uk/hss/news/2014/140217-water-cannon.php