So far there have been 8 people confirmed dead, and 32 injured after a police helicopter crashed onto the roof of the Clutha pub in central Glasgow during a concert that was packed with an estimated 120 people. However, despite descriptions of 'panic' and 'pandemonium', again the evidence shows that the behaviour of survivors and eye-witnesses was anything but 'panic', with reports of people running towards the pub to help as soon as the helicopter had crashed (instead of fleeing away from danger). A report by the BBC quotes an eye- witness;
"My own reaction was to run straight up to the pub.It was amazing to watch just how people were trying so hard to get into this building."

The local labour MP, Jim Murphy was in the area when the helicopter crashed, and described the spontaneous co-operation he saw  that happened in the time before the emergency services arrived, as eye-witnesses formed a human chain to help people out of the pub & assist with the casualties. An interview with the Leader of Glasgow city Council also illustrates the general co-operation that happened in the aftermath;


[people] "helped out their fellow human beings who were out having a good time. It's Glasgow at its best you know, if people are in need the spontaneous response is to go to their help. And I want to pay great tribute to that and I'm very proud as leader of the city that that was the reaction. It doesn't surprise me."
Indeed the only people who seem surprised that people weren't running away and 'panicking' in the aftermath of this incident seem to have been the journalists who were interviewing witnesses to this incident!
The scenes of spontaneous co-operation that we have seen in response to this dreadful tragedy illustrate very well how people behave remarkably well during such incidents, and I would argue that it is a universal human response to adversity (although I have been to a  variety of gigs in Glasgow over the years and can also account for the general hospitality and generosity of Glaswegians!). In a previous post , I looked at how the idea of spontaneous help in emergencies by eye-witnesses & bystanders is being increasingly recognised via the concept of 'zero-responders', whereby, those immediately affected by such incidents come together to help each other before help arrives from emergency first responders. Research I have done into 7/7 (e.g. Cocking, 2013), argues that this co-operation happens because people develop a shared sense of identity in response to a common threat which encourages cooperative (rather than selfish) behaviour.
My thoughts go out to the victims and their families of the helicopter crash, and I also hope it is of some comfort to those affected that people's general responses to this disaster yet again contradict the clichéd  views that wrongly predict that such situations will result in selfish and/or 'panicked' behaviour. 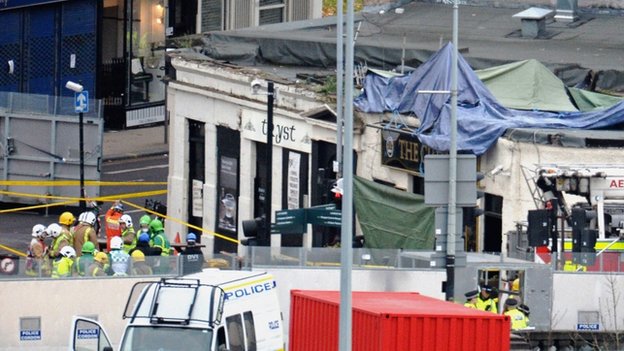