As I write this, Kenya has begun 3 days of national mourning after the attack on the Westgate shopping mall in Nairobi, where so far at least 67 people have been confirmed dead, and more information is emerging out about how people responded to this horrific incident. As usual, media reporting is full of accounts of 'panic', despite most of the footage I've seen showing little evidence to support this. People are clearly fleeing from danger (which I would argue is quite a logical response, given the situation!), but within this flight, there are also many examples of people helping others as they escape. What's also worth noting is how bystanders can often contribute towards the safe and efficient resolution of such situations.

An eye-witness who was in the mall when the attack began told the BBC about how he not only tried to help others as he escaped, but also went back in to help evacuate more. When told by the reporter 'you must have saved a lot of lives', he replied, 'it was a team effort- wasn't just 1 person'.  Other reports from eye-witnesses illustrate similar tales of co-operation, and an orthodontist who has a clinic in the mall describes how he communicated with his son to help the authorities lead him and 23 of his patients to safety (with his son actually leading security personnel back into the mall to show them where the clinic was).  These accounts show the courageous things that brave individuals can do, but I think they also reflect the general co-operative norms that exist in such situations. This is because if 'mass panic' actually happened in such emergencies, it would be much more difficult for any brave individuals to emerge (if people are running around like headless chickens, they're less likely to listen to others!). Therefore, the reason that such people are able to influence others to co-operate, is that people don't tend to lose their capacity for rational thought (as panic models would predict) and are able to act together to escape. This supports previous research I did with  John Drury into 7/7 (Drury et al, 2009) that found general co-operation among survivors in the immediate aftermath of the bombings on the London transport system.

The attack on the Westgate mall  also illustrates a concept that is being increasingly recognised in emergency response- the role of those directly affected or 'zero-responders'. This is because there will always be a delay in the emergency services reaching the scene (however quick they are, no response is instantaneous), and so uninjured bystanders may need to look after casualties in the immediate aftermath before paramedics and other first-responders arrive. This is something that I looked at in relation to bystander responses during 7/7 (Cocking, 2013), and more recently, the Boston marathon bombings.  The prolonged nature of the Westgate incident also shows how there can sometimes be delays in first-responders reaching casualties and so those trapped in siege situations may need to help each other out before professional help arrives. Cole et al (2011) point out that the 2008 Mumbai terrorist attacks  went on for over 48 hours, and hundreds of people were trapped in the buildings targeted, meaning that they had to look after each other before professional responders arrived. Therefore, this general crowd resilience in emergencies is a resource that can and should be drawn upon, rather than assuming people will be too shocked or 'panicked' to help each other. I hope that this can provide a glimmer of comfort to those affected by this shocking incident, as I believe it shows the power of the human spirit to deal with terrible adversity. 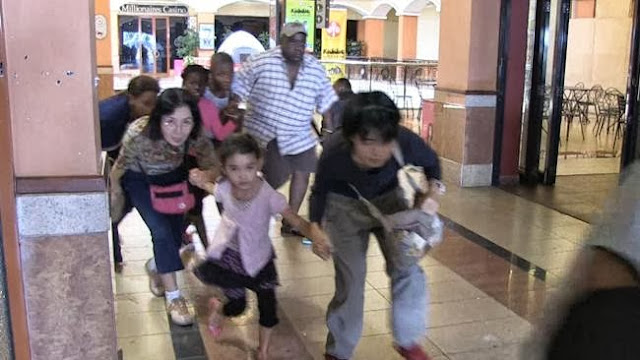