Variations in views of EDL protest in London


This weekend saw some interesting scenes in London as the anti-Islamic English Defence League (EDL) attempted to march into the borough of Tower Hamlets (which has one of the highest Muslim populations in the country), and home of the East London Mosque. An earlier decision in the High Court  had ruled that the EDL could not march into the borough as they had wished, and allowed the Metropolitan Police to cut the march short, meaning that it would end at Aldgate (which is on the border of the City of London and Tower Hamlets). However, it was clear that the EDL still intended to march, and so thousands of  anti-fascist protestors mobilised in opposition to them. Estimates of numbers vary, but it seems that around 5-600 were on the EDL march (significantly less than the 1-2000 predicted by police), and around 5000 attended the counter-demonstrations.

The policing of yesterday's march and the counter-demonstration raises interesting issues about how such events are policed and also how those affected perceive such events. First of all, a vast amount of resources were expended in policing this day, with reports of around 3000 police on duty from up to 14 different forces (and officers from as far away as the West Midlands and Leicestershire). This figure seems credible, as protests where there are two opposing sides (rather than one group of demonstrators with similar aims), expend more resources, as the police try to keep both sides apart from each other. 300 arrests in total were reported: 14 EDL protestors for a variety of public order offences (such as violent disorder and assault of a police officer), and 286 counter-demonstrators were also arrested (the majority of these under Sections 12 or 14 of the Public Order Act, which can place restrictions on the time and location of protests). The disparity in numbers arrested from the two opposing sides (especially as the anti-fascists outnumbered the EDL by almost 10 to 1) fits with the contexts in how such arrests were made. It seems that the 14 EDL marchers were arrested for various different reasons, and so were probably as a result of individuals being singled out for specific offences that they had committed. However, the vast majority of the counter demonstrators were arrested after being  'kettled' en masse (see picture below for an example of one 'kettle' near Tower Bridge), which is an example of the indiscriminate public order tactics that have been criticised by mine and others' research in this area (e.g. Cocking, 2013; Stott 2009), as they risk escalating crowd disorder. However, even if 'kettling' helps the police achieve their short-term aims (they did so on Saturday to prevent break-away groups of counter-demonstrators reaching the sterile area through which the EDL were marching), I would argue that use of such a tactic can create a generally confrontational atmosphere that means that innocent bystanders can also get caught up in the situation. This has resulted in previous tragedies, something I explored in a  previous post about the death of Ian Tomlinson, during the 2009 G20 protests in London. The Network for Police monitoring also provide more details on the tactic of mass arrest and how it has been misused in recent police operations in London and the South East. 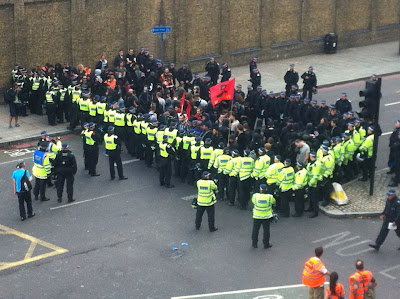 Five Legal Observers were also arrested, which has attracted  controversy, as their status has usually been respected previously by the police (while they are often sympathetic to the aims of the protests they observe, they do not openly participate and merely take details of what happens for possible future legal defence). Finally, it seems that the majority (if not all) of the counter-demonstrators were also given restrictive bail conditions by by the police, requiring them not to protest against the EDL within the M25 area.

The Public Order Act and its effect on policing
All of these actions have resulted in accusations that a decision was taken at a senior level to treat the two sides differently which created the context in which such mass arrests of counter-demonstrators could happen- something I also looked at after the far-right March for England in Brighton this April. As I said previously, I would suggest that at least part of this can be explained by the police's selective interpretation and use of the 1986 Public Order Act (POA), whereby they feel they have a duty to facilitate protests by those who approach them for permission (as the EDL did), but also that they can impose sanctions against those who do not (such as the anti-fascist protestors who left the counter-demonstration in Whitechapel to  try to block the route of the EDL march). While the POA does allow the police to place restrictions on gatherings if they fear disorder,  I feel this is a rather narrow interpretation of the law, and I believe it is often misused to justify such mass arrests on the grounds that protestors are acting 'unlawfully' if they don't seek the police's prior permission to protest, or deviate from pre-arranged routes. Indeed, the HMIC report released after the G20 protests concluded that the police had a duty to facilitate all protests, whether or not they had complied with the rather narrow guidelines of the POA.

There are also some interesting historical parallels relating to Saturday's protests, as it was the disorder provoked by marches of Oswald Moseley's British Union of Fascists (BUF) in the 1930's that inspired the original 1936 Public Order Act, that banned the wearing of paramilitary uniforms (the BUF were also known as the 'blackshirts' because they dressed in black) and required protestors to inform the police in advance of proposed marches. Ironically though, the POA ended up helping the fascists somewhat, as post 1936 they tended to liaise with the police and so this gave them more ‘legitimacy’ in some people's eyes. Furthermore, the POA has more often been used since against left-wing and other anti-fascist protestors who may be less keen on liaising with the police. The most famous of these marches was the battle of Cable Street in October 1936, where Mosley's blackshirts had to turn back because the police could not clear the anti-fascist crowds that gathered to block their proposed march though a predominantly Jewish area of the East End. Coincidentally, some of the fighting in 1936 happened outside the Royal Mint, (there is some original footage on youtube) where protestors were detained on Saturday, and as they were lead out of the kettle one by one, they were held on commandeered buses in the road that leads onto Cable St.! 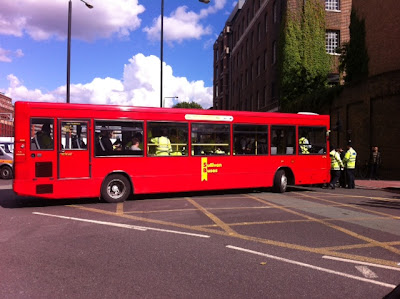 protestors detained on buses at the entrance to Cable Street


Different perceptions of the same event

How these events have been portrayed since by various anti-fascist groups also highlights some interesting differences in how those involved can perceived them. For instance, the left wing group Unite against fascism (UAF) has a rather triumphalist account that focuses on the rally they organised in Altab Ali Park, and the 'victory' march they held down Whitechapel road (despite the fact it was the police who prevented the EDL from going from Aldgate into Tower Hamlets itself). Initially, there was no mention made of the mass arrest of those who broke away from the rally to try to block the route of the EDL, although this was mentioned in a later addendum.  Other coverage (such as the Brighton-based news-sheet schnews) highlights some people's displeasure at the UAF holding a 'victory' march while nearly 300 other protestors  were being kettled by the police. The South London anti-fascists were also more circumspect in their coverage, and while expressing their pride in those who mobilised and thanks to those who supported people arrested, they also highlight the need to reflect on what went well for them and what didn't.

These differences in views reminds me of a paper I co-wrote with John Drury and others (Drury et al, 2005), where we interviewed people who had been on a variety of different protests over the years, and asked them about what ones they felt were empowering and/or disempowering. What was interesting was that different participants would sometimes view similar events differently, depending on their own views of empowering actions and whether they were consistent with helping them achieve a sense of collective identity. For instance, some would consider traditional marches as empowering because it gave them a chance to spread their message to the general public (by selling papers, getting new members for their group etc.). However, those that favoured more direct forms of protest (such as direct action road-protestors and hunt saboteurs) could consider such events as disempowering, because the way they derived a sense of empowerment was often achieved by physically confronting the particular issue they were protesting about. Therefore, I wouldn't be surprised if similar processes are at play in the different anti-fascist groups after Saturday's demo, with  views of whether such events were empowering or disempowering being guided by individuals' perceptions, as well as the mere sequences of what actually happened on the day.