The international community is now beginning to respond to the devastating earthquake in Nepal at the weekend. So far nearly 4000 people have been killed and over 6500 injured, with 4 million affected (although these casualty figures will probably rise as more remote areas are reached and the true scale of the damage is discovered). The media focus seems to be rightly shifting to the international aid response, and this is a welcome development, as not only are there thousands of people in desperate need in an already impoverished region, but again I would argue that the initial media reports of 'panic' are yet again not supported by events on the ground.

Media expectation of 'panic'
On 27/4/15, Radio 4's Today  programme included an interview with a British PhD student based in Nepal (interview begins about 2:14:40 into the programme). In it he explicitly rejected the notion when asked by the interviewer if there was 'panic' & instead focussed on how people cooperated with each other;
'while people were scared, I wouldn't necessarily call it panic... people were trying to help whenever they saw people in need'
This is supported by the image below of people helping clear rubble & rescue survivors in Kathmandu  and the general lack of police or military uniforms in the photo (I can only see one person wearing camouflage clothing) leads me to believe that there was general cooperation amongst bystanders in the aftermath of the earthquake- a concept known as 'zero-responders', that I have looked at in previous  blog posts. 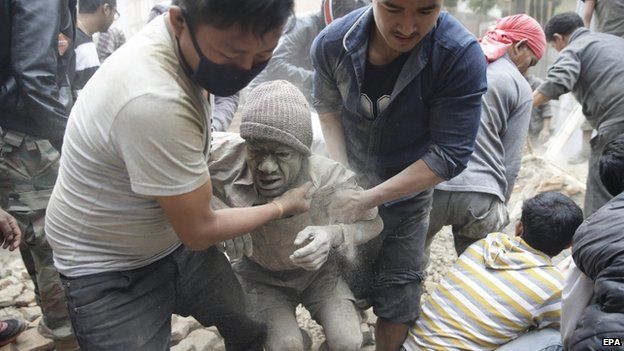 'Panic' or evacuation?
Another more specific way in which panic has been used, also needs picking apart, as again I don't think it stands up to scrutiny. For example, there have been media descriptions of people 'panicking' as they fled buildings during the aftershocks, and there is quite an evocative video clip article, where BBC journalist Justin Rowlatt is caught in the middle of an aftershock and people fleeing buildings for open ground are clearly visible. However, he also rightly points out that 'earthquakes don't kill people, buildings do'. This is a basic tenet of safe evacuation behaviour during earthquakes, and seeing that the area where the earthquake happened is prone to such tremors, I would imagine that the local residents are familiar with such procedures. Therefore, far from being irrational 'panic', I would say that evacuating already weakened buildings during an aftershock is an example of sensible evacuation behaviour, possibly something that locals had learnt from previous education as to what is the safest behaviour in earthquakes. Another example of this is the photograph below of people evacuating a building in Lucknow, northern India, which is near the border with Nepal. Within the story that accompanies this picture is the following quote;
'Panic gripped people who came out of their houses, buildings, hospitals and shopping complexes to take shelter in open as they felt earthquake tremors'

However, from a more detailed look at the picture, I can't see expressions of fear on anyone's faces (some even appear to be smiling), and there doesn't seem to be any running or pushing that might be associated with a 'panicked' evacuation.

Conclusion:
The Disasters and Emergency Committee has now set up an appeal for donations, and hopefully international aid will soon reach those affected by this awful tragedy. I am also relieved that media descriptions of 'panicked' reactions to the earthquake now seem to be receding, but I do wish that they wouldn't immediately jump into using the term, as it rarely matches up with people's actual behaviour and just perpetuates the myths about crowd behaviour that I and other colleagues in this field seem to spend so much time trying to unpick.