New Year celebrations in Shanghai, China have ended in tragedy, with 36 dead and nearly 50 injured. It seems there was a fatal crowd crush about 20 mins before midnight, according to media reports. There has also been speculation in some coverage that the tragedy happened when people rushed forward to pick up fake money being thrown from the balcony of a bar into the crowd. However, I have seen this account disputed by others on social media, claiming instead that the crushing happened at a different location to the bar, and a BBC report also argues that the authorities in Shanghai were not adequately prepared for the size of the crowds on Shanghai's waterfront. I also saw an interview with a survivor in hospital who reported that people moving in different directions through the highly packed crowds caused crushing problems. So, I would suggest that crowd management failings may have been a more likely cause of the disaster. We shall have to see if more information emerges about this tragedy that helps paint a clearer picture of what actually happened, but yet again, the media's default response after tragedies such as these seems to be to blame the victims of crowd disasters rather than the authorities responsible for their safe management.

The BBC coverage quotes a photographer from the US who paints a bleak picture of people's behaviour;
"Nobody seemed to be in control and people were crying. It was one of those times when you see the worst in people."
However, no further description is given of any actual examples of what anyone was doing that illustrates 'the worst in people', and the very next quote used from another witness which describes spontaneous cooperation in the crowd appears to contradict this assertion anyway;
"Lots of people spontaneously linked hands to block the crowds, so the injured had space to settle down, and to allow a clear passage for ambulances,"

As I have argued in previous blogs, when disasters such as these happen, the term 'stampede' is almost always used uncritically by the media coverage to describe events, with all its negative connotations about crowd behaviour in such incidents- for instance that people are unthinking and/or selfish and trample over victims in their efforts to flee danger (for more details on why the term 'stampede' is problematic, see John Drury's excellent blog on the topic). Tweets I have seen from the crowd modelling expert Keith Still argue that the tragedy appears to have been caused by a Pressure Wave in the crowd resulting from a dangerous (but usually entirely avoidable) build up of crowd density, and he highlights that previous analyses of crowd disasters (e.g. Fruin, 1993) have concluded that;
'Virtually all crowd deaths are due to compressive asphyxia and not the "trampling" reported by the news media'
Another study of a fatal crowd crush at a concert by the Who in the US in 1979 (Johnson 1987), found that survivors tried to help others that fell over, (rather than deliberately trampling them underfoot) and if cooperation did not happen, it was because people were physically unable to do so due to crowd density pressures. If trampling does occur, it is rare, and usually because of a domino effect in highly packed crowds (e.g. if someone falls over the physical pressure of the crowd can force others to fall on top of them)- not because people are 'stampeding' blindly without concern for others as they flee danger.

Therefore, yet again I find myself repeating my call that we should stop using the term 'stampede' to describe tragedies such as the one seen in Shanghai, as it is not helpful in getting to the truth about what happens and may even distract from the apportion of responsibility for the tragedy, if as I suspect, it eventually turns out that crowd mismanagement was the cause. Such disasters are not inevitable and it is usually possible to prevent them occurring, providing there is adequate crowd safety management planning beforehand, and speedy responses are put in place to prevent crowd density reaching dangerous levels. 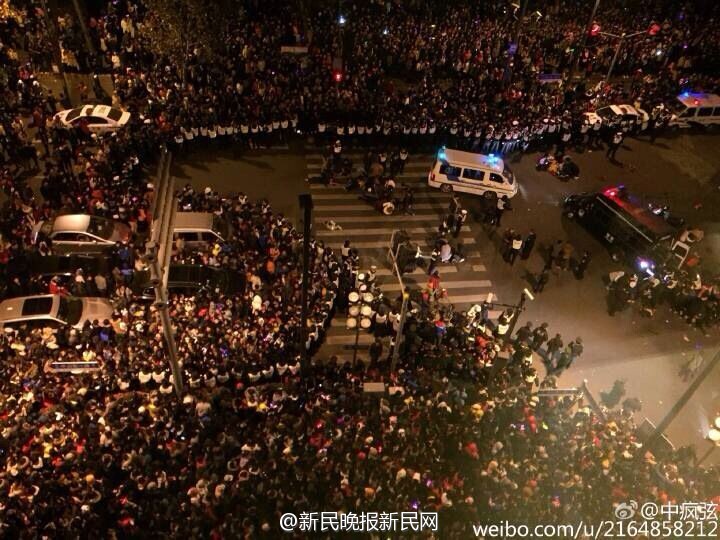 Update:
Since I wrote the post above, the BBC have reported that Shanghai police now deny that fake money being thrown from a balcony was the cause of the tragedy, as this happened after the crush occurred (and the BBC has also largely removed references to 'stampede' in its coverage, and are now using the term 'crush' instead). Therefore, it seems increasingly likely that poor crowd management was instead responsible, and the casualties seemed to have resulted from dangerous crowding levels causing a wave of people to topple down a flight of stairs leading to a viewing platform. The Chinese President has ordered an investigation to examine whether there were enough police on duty to safely manage the crowds.