As the year draws to a close, it's time for another review of the highlights of my blog for 2014. This year I looked at public order policing in the UK, and how it is still being influenced by the fallout from the 2011 riots in England. There were also examples of public order policing abroad that showed similar patterns to that seen in the UK (perhaps reflecting similar ideological views towards crowds held across the world).I also looked at Ebola, and how specific aspects of the disease as well as the authorities' apparent fear of public responses seem to have influenced how national governments have responded to the outbreak so far. Finally I focussed on situations where crowd cooperation may become difficult if people are set in competition with each other. Many of these stories are ongoing, so I'm sure I'll have lots more to blog about in 2015!

Events close to home:
The year began with the announcement of the result of the inquest into the death Mark Duggan, (whose shooting by officers from the Metropolitan Police sparked 5 days of rioting across England in 2011), and I criticised the media for playing up the possibility of disorder after the result of the inquest- something that also happened before the result of Scottish referendum in September. I argued that while collective disorder in such emotionally charged situations is possible, it is far from inevitable, and that creating a climate where riots were expected, was not only irresponsible, but also makes it more difficult to conduct an objective examination of events in the aftermath of the comparatively rare situations when riots actually do happen.
The theme of public order policing continued in February, when there was a public consultation into whether the Metropolitan Police should be allowed to use water cannon the next time there was major disorder in the capital . I wrote a report that highlighted my concerns about its introduction to policing in mainland Britain (it is already used routinely in Northern Ireland): that water cannon was an indiscriminate tactic that would most likely escalate any disorder, and that there was a real risk of people catching hypothermia if it was used (especially if it was used in conjunction with the tactic of 'kettling' crowds). Authorisation to purchase water cannon from Germany was granted in June, and their use on British streets awaits final approval from the Home Secretary (which may be granted the next time there is serious disorder in the capital), and in a letter to the Evening Standard, I responded to Boris Johnson's offer to be hit by water cannon (I believe he has yet to follow through on this offer!), arguing that there were more serious issues at stake behind this publicity stunt. Water cannon- coming soon to a riot near you?

International contexts:
Over the late summer and autumn, I looked at public order policing further afield, and argued that there were issues involved that were similar to those seen in the UK. For instance, August saw prolonged rioting in Ferguson, Missouri in the US after an unarmed Black teenager (Michael Brown) was shot dead by local Police. I argued that the use of indiscriminate tactics (such as Tear Gas, stun grenades, sonic devices etc.) and the heavily militarised response to the protests was a major factor in the instigation and spread of collective disorder. I also suggested that it was necessary to consider the wider social contexts in which these protests occurred, and the worrying frequency with which African American males die at the hands of mainly white police officers, shows that the US still has a long way to go in addressing social inequality and the distrust and alienation that many local communities feel towards their police forces.
October saw the world nervously watching mass pro-democracy protests in Hong Kong, fearing a repeat of the bloody crackdown as happened in Tienanmen Square in 1989. Thankfully this did not happen, but the local Hong Kong Police did still display some quite forceful public order tactics at times. I highlighted an interesting historical coincidence that the current UK public order policing tactics were learnt from the colonial Hong Kong Police force after the riots seen in English cities in the early 1980s. So, it would have appeared slightly hypocritical had the UK government been too forthright in their criticism of the policing of the protests! 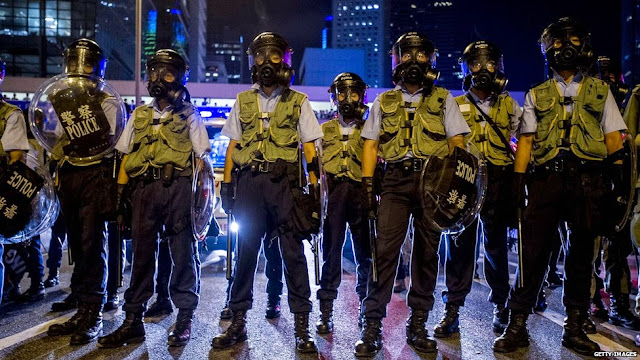 Public health emergencies:
This year saw 3 West African countries ravaged by Ebola, and I looked at how the authorities in the developed world have responded to this global public health crisis. I argued that the decisions in October by Australia to suspend visas to people from Ebola-hit countries, and the UK to introduce screening for Ebola at UK airports (by asking entrants from the Ebola zone a series of questions and taking their temperature) could be considered as examples of 'elite panic'. This was because such decisions went against expert advice and appeared to be done in response to pressure to be seen to be doing something and could have limited effectiveness in detecting Ebola. This seems to have been borne out by recent events, as Pauline Cafferkey (a Scottish nurse who recently returned to the UK after treating patients in Sierra Leone) contracted Ebola after returning home, despite having her temperature taken 7 different times before becoming unwell. The Chief Medical officer announced today (31/12/14) that screening for Ebola will be reviewed, although she emphasised there was still a very low risk of public infection, as Pauline was not displaying any symptoms when she travelled home (and people only become infectious in the end stages of the disease- which is why proportionately so many health workers in Africa have tragically died of Ebola). 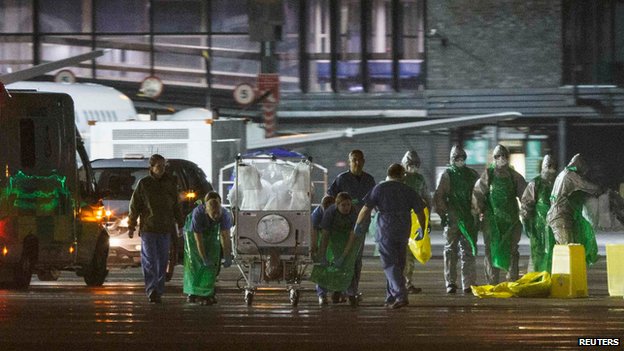 
Cooperation vs. competition?
Finally, towards the end of 2014, I looked at the issue of cooperation (or not) in crowds. A classic (although often untrue) cliché is that people will become inherently selfish in crowds- especially in stressful situations. The work that I have done on mass emergencies has found that this is rarely the case, and that people tend to behave cooperatively, because a shared identity often emerges from the situation which encourages such cooperation. However, in situations where people are cast in competition with each other for limited resources, then it may be more difficult for such a shared identity to emerge, and so cooperation may be less likely. I argued that the scenes witnessed at UK stores on Black Friday at the end of November illustrated this concept perfectly, and that retailers needed to be more responsible when planning for and hosting such events, as they had the clear potential to set people in competition with each other. 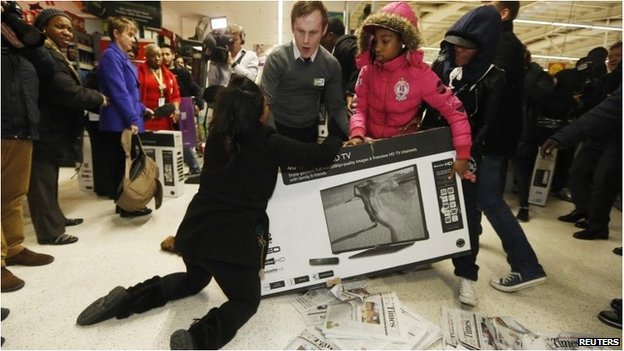 Shoppers compete on 'Black Friday'
Posted by chris cocking at 04:41