An article I wrote for The Conversation on Hong Kong Policing can be found here, which is a shortened version of the piece below.


Introduction:
The recent mass demonstrations in Hong Kong that have been calling for greater democracy saw the Police initially responding with riot squads, tear gas and pepper spray against peaceful protestors. However, this authoritarian response merely caused the protests to grow, leading to the temporary withdrawal of the Police. On Sept 30th Human Rights Watch called for the authorities to avoid using excessive force, and there was a stand-off during the national holiday to celebrate the founding of Communist China. Protestors had planned to occupy government buildings if the Chief Executive CY Leung didn't stand down by midnight Oct 2nd, resulting in a heavy police presence outside the Chief Executive's building.  In a recent Press Conference, CY Leung still refused to quit, but has offered to hold talks and this offer has been accepted by protestors. The situation currently appears to be calmer, although many protestors are still on the streets.

There are interesting and rather ironic historical antecedents to how the current situation has been dealt with by the authorities that date back to Hong Kong's colonial past. For instance, Chris Patten (who was the last governor of Hong Kong when it was handed back to China in 1997) has accused the Chinese authorities of reneging on commitments to uphold democratic principles. However, the way in which the Hong Kong Police Force initially dealt with the protests owes much more to when it was a British colony, and this style of policing doesn't seem to have changed significantly since the British handover in 1997. So, their recent use of riot squads with short shields, tear gas, (with rubber bullets in reserve) is nothing new, with this approach being developed in the 1960s to deal with the colonial administration's fear of rebellion by Chinese Communists and/or local Trade Unions. Furthermore, the way they respond to public order incidents has also influenced policing closer to home. Gerry Northam's 1989 book- Shooting in the Dark argued that British policing shifted in the 1980s from a policing by consent model, to a much more coercive and para-militarised approach, based upon how the colonial Hong Kong Police were organised. He recounts that after the riots in the summer of 1981, (which saw the most significant urban disorder in England for a generation), the Association of Chief Police Officers (ACPO) invited the Director of operations at the Royal Hong Kong Police to their private annual conference, to advise UK police on how they dealt with crowd disorder. From this conference, ACPO set up a working group to review their riot control tactics and develop a national training package for all UK forces. This resulted in the development of the ACPO Public Order Training Manual, a secret document which only emerged during the trials resulting from one of the largest set-piece confrontations of the 1984-5 miners' strike. 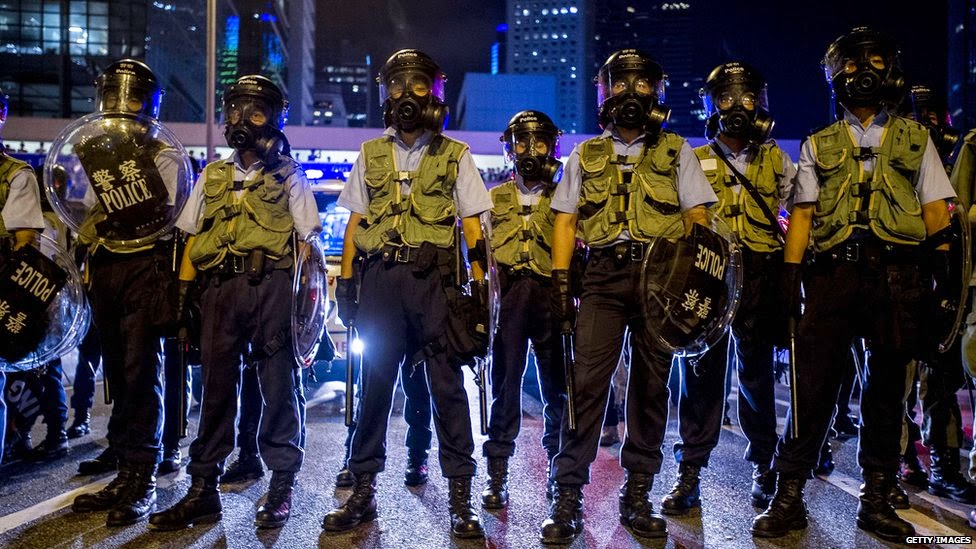 The Battle of Orgreave
The Battle of Orgreave happened when 10,000 striking miners were confronted by up to 4000 police officers from across the country at the Orgreave coking plant in South Yorkshire, resulting in running battles between pickets and police, with 93 arrests and over 100 injured from both sides. This incident was significant because it saw the first major public display of the new paramilitary tactics that British police had learnt from their colleagues in Hong Kong, with Waddington (2011) arguing that the police planned a set-piece confrontation rather than reacting to violence from pickets as was suggested by the media. During the day police in riot gear would stand in formation holding long shields, and periodically part their lines to allow mounted police and officers with short shields to charge at the crowd, with snatch squads making arrests. In 1985, the  BBC produced a documentary about Orgreave and interviewed John Alderson, a former Assistant Commissioner in the Metropolitan Police. This was his response on seeing footage of the fighting at Orgreave;

'This is a carbon copy of the Hong Kong riot squad…The British people should never accept colonial style policing. It isn't democratic policing, it’s forceful, repressive policing. Instead of exporting the developed British tradition to the colonies, we are now importing colonial policing into Britain. The question that now faces us all is now this- if we've seen the Hong Kong Police tradition used in Great Britain in 1984, what are we going to see in future on the streets of our big cities?’
(quoted in Northam,1989 p.59-60 )

The Battle of Orgreave may have happened over 30 years ago, but I find this quote rather prescient, given the trend towards increasingly militarized policing in Britain that has happened since (especially since the 2011 riots)-something I argued against in a report I wrote regarding the introduction of water cannon and that is also summarised in a previous piece I wrote for the Conversation. 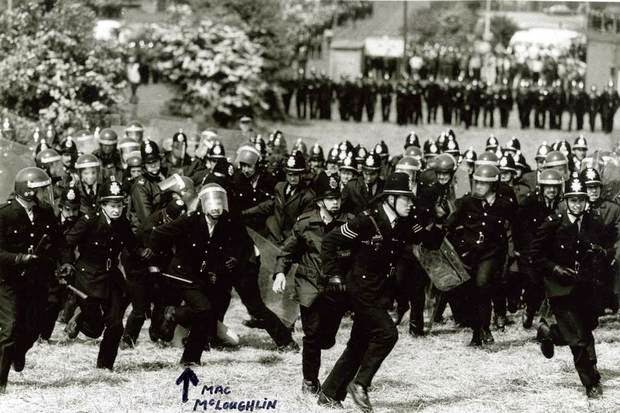 British double-standards?
We shall see how the situation in Hong Kong develops, and hopefully there will not be a bloody crackdown by the People's Liberation Army (PLA) similar to Tiananmen Square in 1989. So far the Chinese authorities seem to be relying on the Hong Kong Police to manage the situation, perhaps fearful of the reputational and economic damage that could follow from sending in the PLA. However, if the Police do decide to take a more repressive approach to the protests (which seems possible given the recent admission that they have begun stockpiling rubber bullets and tear gas at the Chief Executives' Office), then those in the UK should think carefully about how they respond. For, while any brutal repression of the predominantly peaceful protests in Hong Kong should rightly attract international condemnation, it may be slightly hypocritical for British politicians to criticise the actions of a police force that was originally set up by a colonial British administration largely because of the fear of rebellion amongst the local population, and this force's public order tactics have directly influenced to this day how our own police deal with public order situations in the UK.