'Panic' at US airports?

There have been a couple of recent incidents at US airports that have created some interesting discussions about crowd behavior. Last night, (28/8/16) the passenger terminals at Los Angeles International Airport  (LAX) were evacuated  after reports that loud noises were misinterpreted as gun-shots. This follows a similar incident at New York's JFK airport two weeks previously, and both have generated detailed coverage in the US media, with reports of people 'stampeding' and mass 'panic' along with some lurid speculation about the inherent dangers of crowds. However, as is often the case with coverage of such incidents, I think what actually happened is a little more complicated than mere crowd 'irrationality'. In this post, I will quickly look at both incidents in turn, and then explain that while there could be possible implications for safe crowd management, adopting a default position that crowds will behave irrationally in such situations could obscure proper understanding of what went on, and more importantly, reduce the chances of any such future incidents being managed safely.

JFK & LAX evacuations:
The first incident happened at JFK airport on 14/8/2016, and there is quite detailed coverage in the New York magazine suggesting that the following chain of events happened. It seems that an initial crowd surge began after applause in response to Usain Bolt's victory in the 100m Olympic final was falsely believed by some to be gunfire and one passenger reported seeing a gun. The resulting crowd movement caused some of the metal poles that are used to create queue lines to fall over (like the ones in the picture below), which created a clacking sound that some believed was gunfire, giving further credence to the rumours  already circulating that there were active shooters in the airport. There were also reports that the Police drew their weapons and ordered passengers to leave the terminal at gun point with their hands raised. Therefore, there seems to have been a cascading chain of events that added credibility to the rumors of shooters being present and resulted in heightened anxiety among those present and the consequent crowd flight that was seen. 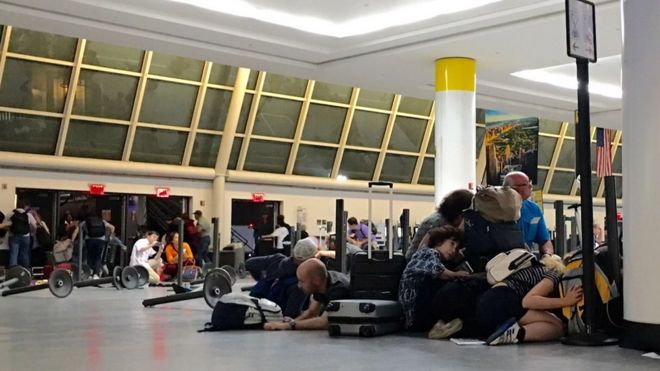 Moving now to the incident at LAX, similar scenes seem to have happened after loud noises were also misinterpreted as gunshots. Coverage of the story in the LA Times, states that after a person dressed as Zorro with a sword was detained by Police outside the passenger terminals (he was released after they realized it was a plastic sword), rumours circulated of an active shooter, which caused passengers to evacuate the terminal, with some leaving their baggage behind and/or opening emergency doors that led onto the tarmac where the planes were situated.  The following eye-witness account illustrates the anxiety that some of those affected appear to have experienced;

'Actress Anne Dudek of Santa Monica was one of the travelers who fled from Terminal 7 after her United Airlines flight arrived about 8:30 p.m. She said that she went down the escalator to baggage claim about 8:45 p.m and a man who appeared to be panicked ran by, warning everyone to run because he said people were being shot. "People started dropping bags and running out of the terminal," she said. "Panic spread." Dudek said she did not hear any shots, but decided to leave Terminal 7. She ran across the street, headed through the parking structure and made her way to the area near Southwest Airlines. She eventually reached her parked car and left the airport.'


'Panic' or logical flight behaviour?
While the previous extract presents a rather chaotic picture, the accompanying video clip in the LA Times article is less dramatic and while people are either running or quickly walking out of terminal, it is all quite orderly, and not the actions that would normally be associated with a 'stampede'. I think this illustrates quite well how journalistic hyperbole (and sometimes even eye-witness accounts) of such incidents often slips easily into descriptions of 'panic'- something I have looked at in my own research of survivors' accounts of emergencies (Cocking & Drury, 2014). However, even if one accepts the premise that rapid flight occurred, there are a couple of things still worth considering.

First of all, research that I have done into crowd flight during emergency situations (Cocking, 2013) found that while such behaviour was often an instinctive reaction (e.g. people running as soon as they see a crowd surge towards them without waiting to find out the nature of the threat), socialized responses quickly over-ruled such instinctive reactions (such as helping people who had fallen over, re-grouping to deal with the threat etc). Therefore, I concluded that even in such extreme situations, describing sudden crowd flight as a 'stampede' didn't fit with detailed observations of what actually happened on the ground, and this has been supported by more recent blog-posts of other crowd emergencies.
Secondly, there is the issue that crowd behaviour is often pathologized by outside observers with the benefit of hindsight. So it's very easy to write off the behaviour of passengers at JFK and LAX as 'panic' after the event when we know there wasn't an active shooter at either incident and so there was no need to evacuate. However, if you are caught in a fast-moving situation without access to information, then hearing from others that there is a threat may appear credible, and so fleeing from this perceived threat may seem to be the most logical thing to do at the time if you don't have an overall view of what is going on. This may also be particularly relevant in the current context of heightened security at US airports post 9/11, (and the more recent mass shootings in Paris, Orlando, Dallas etc) meaning that people may be more alert to danger at JFK & LAX compared to other international airports. Therefore, providing crowds with reliable information in emergencies is vital, an issue that I will address in my final section.

Provision of information in emergencies:
The provision of information during emergencies is a contentious topic, and until relatively recently, emergency planning and response was often influenced by the assumption that crowds will 'panic' if made aware of a threat- thus justifying the idea that information should be withheld in emergencies. Some of the LA Times coverage of the LAX incident may appear to support this notion, such as this extract with the reporting an interview with the local mayor;
Los Angeles Mayor Eric Garcetti said the chaos that unfolded at the airport appeared to be a case of old-fashioned panic and miscommunication that spread quickly. "It's almost like a game of telephone, by the time people were hearing things, I think they heard it was an active shooter … that's when chaos can break out... It wasn't really the technology, it was just … one person yelling out to another and yelling to another.
However, I would still take issue with the notion of contagion of 'panic' after people have alerted others to a possible threat. This is because decades of work into crowd behavior reject the idea that crowds blindly follow any source of information, and not all rumours circulate without question in crowds. I would argue therefore that the solution to this problem is not to withhold information as a rule from crowds in emergencies. Research I did with John Drury into mass emergencies (Drury & Cocking, 2007) concluded that wherever possible, information should be provided about threats, as well as action that people could take to avoid and/or mitigate such threats and keep themselves safe, The crucial points to consider are the delivery of information and also the relationship that the crowd has with that source of information, so looking at ways to build trust between the public and official sources of information is vital to prevent circulation of false rumours. Technology is increasingly used to deliver such information, and while it will never be a complete panacea, it can help send out a consistent message to everyone with a mobile phone in the vicinity. So for instance, LAX has an Wireless Emergency Alert system that they used in this incident to send out a text message advising people that there wasn't an active shooter.

Conclusion:
I would argue that we should take a more positive view of crowds than seems to have been adopted in coverage of the incidents at JFK & LAX. I'm not saying that we can't improve upon how such events are managed, but I would suggest that the possible problems that such incidents can generate do not rest within the inherent pathology of crowd behaviour and that emergency planners need to work with crowds more to ensure safe evacuations. Furthermore, the provision of consistent and credible information that crowd members can act upon is vital  as this will help foster a more collaborative relationship with crowds, and most involved in the field of crowd safety management now accept this is crucial in ensuring that such incidents are managed safely.

Drury, J. and Cocking, C. (2007). The mass psychology of disasters and emergency evacuations: A research report and implications for practice.http://www.sussex.ac.uk/affiliates/panic/Disasters%20and%20emergency%20evacuations%20(2007).pdf