Crowd responses to the Nice attack

France is reeling again after another horrific terrorist attack in Nice that has so far caused at least 84 deaths (including many children) during the Bastille day celebrations when a truck ploughed into crowds along the Promenade des Anglais on the seafront. This attack will be particularly painful for France, because of the great importance attached to the Bastille day celebrations. I was in Paris on July 14th a few years ago, and it was clear to me how important these celebrations that commemorate the French revolution are to the French psyche. Three days of national mourning from Saturday 16th July have now been declared, and the state of emergency imposed after the Paris attacks in November 2015 (which was due to end) has been extended by another 3 months.

Crowd flight:
There is extensive BBC coverage of the incident and there are numerous interviews with eye-witnesses that describe the situation in some detail. As is common in these situations, the term 'panic' is often used to describe people's reactions as they flee from danger. However, I would argue that far from being a 'panicked' response, people's reactions appear to be quite ordered within the situation that fits with previous work I have done on crowd flight in response to threats (Cocking, 2013). So, for instance, there does appear to be some evidence of an initially instinctive reaction by bystanders to the flee threat they faced, as illustrated by this eye-witness account;
"Then I saw the truck coming straight at me swerving all over the place. It was perhaps 50 yards away. After that there was no conscious thought, my body took over, time slowed down and I ran and thank God I got out of the way"

I found something similar when I spoke to people who had fled Police charges at demonstrations, and some reported that as soon as they saw the crowd surge towards them, then they began running as well, without waiting to find out what was going on. However, this surge was usually momentary, and tended to dissipate once they realised they were out of danger. In mobile phone footage of the crowd flight in Nice, you can clearly see people running down the street, but the flight is quite orderly and some people are walking quickly rather than running at full-speed. Furthermore, not all people instinctively fled with the crowd, and another eye-witness reports that when he saw people fleeing he actually ran towards the incident to find out what was going on. He does mention that there was 'fear & panic in people's faces', but this appears to be his description of the understandable individual reactions to a truly terrifying situation rather than any collective mass hysteria. He also reports that he helped up people from the ground who had fallen over in the rush to get away. In the footage I watched, I also saw people carrying children with them (at least 3 are still in their pushchairs), and some were still holding their bags. Finally, there were even reports of some people heroically attempting to stop the truck, as an eye-witness told the BBC;
"Some people were hanging on the door and tried to stop it."
Therefore, to me, while this was undoubtedly a terrifying situation for those affected, the crowd's responses still don't seem to fit with the mindless actions that are implied with use of the term 'panic' 
Social Support in the aftermath of the attack:
As has happened after previous terrorist attacks in France and Belgium, there has been an outpouring of support on social media, with people offering sympathy, and practical help, such as the #PortesOuvertesNice hashtag, where people have offered help and/or shelter to those affected by the attack.  Hashtags such as #PrayForNice, #JeSuisNice & #NousSommesUnis (we are united) that show general solidarity with those affected are also trending. Such expressions of global solidarity are common after terrorist attacks, as I explored in a previous blog-post on Paris attacks in Nov 2015 an article for the on-line Conversation after the Brussels attacks in March 2016. This is  because far from dividing communities and exacerbating tensions (as is often the intention behind them), terrorist attacks can actually help bring people together with a shared sense of identity, which can then unite them not only in solidarity with the victims but also in defiance against those who perpetrate such murderous acts. This emergent sense of identity forms part of the theoretical model known as the Social Identity Model of Collective Resilience (SIMCR) that developed from work I did with John Drury into crowd responses to mass emergencies (Drury et al 2009 a &b). While the carnage unleashed upon innocent bystanders in Nice is truly horrific, I hope that this social support and practical help offered to those affected can be part of helping them to recover and re-build their lives and communities in the aftermath. 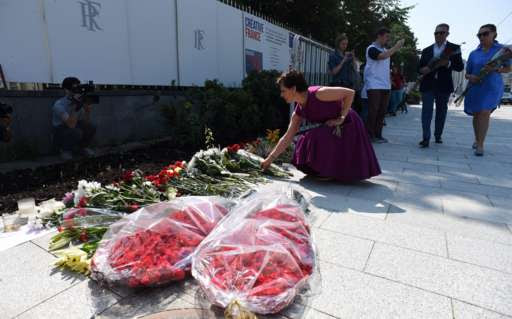 Floral tributes left at the site of the attack