Londoners may well be breathing a collective sigh of relief after the evacuation of Oxford Circus tube station and subsequent lock-down of shops on Oxford Street, was unjustified because the feared terrorist attack did not materialize. However, as with most coverage of such incidents, media reports have been peppered with the use of irrationalist terms (such as 'panic' & 'stampede'), and it has resulted in a fair degree of media requests for crowd psychologists to do interviews (the ones I know of are listed below). Regular readers of this blog will no doubt be familiar that myself and others who work in the field of crowd safety management are highly critical of the use of such terms to describe crowd emergency behaviour & I regularly critique coverage of such emergencies (most recently, the failed bomb attack at Parsons Green tube station, this September). This time the media are particularly keen on using these terms, because there wasn't actually a 'real' emergency, and so this presumably confirms that people were over-reacting and hence 'panicking'. However, I will argue in this blog that it's very easy to write off crowd responses as 'panic' without properly examining the actual behaviors of those involved, or the social context in which they are operating.

I will start with the general point that it's misleading to describe incidents such as these as 'panic', because it implies irrational behaviour, and that if there are any casualties, it is the fault of those who 'panicked'. Furthermore, one could say that it is a perfectly logical act for people to flee what they believe is a potentially life-threatening incident. Ironically, under-reaction in emergencies (especially fires) can be a worse problem, as if people delay action to escape possible danger, this could decrease their chances of a successful evacuation. In his blog, John Drury provides a 10 point guide for journalists, and he highlights the irony that government advice during terrorist incidents is to 'Run, Hide, Tell', but when people do follow this advice, the media call it 'panic'!

With relation to specifically happened at Oxford Circus, the media seem keener than usual to describe it as 'panic' because it turned out not to be a terrorist attack. However, the people involved in this incident would not have had the hindsight of external observers & so may not have known the apparent trigger for the incident (a fight on the platform), so fleeing when they saw a crowd surge towards them (rather than waiting to see what the threat is) may have been the most sensible thing to do given the information they had available at the time. A similar incident happened at Los Angeles (LAX) airport in August 2016 after people mistakenly believed that there had been gunshots and fled the airport terminal. I argued at the time that considering the general fear in the US of terrorist attacks at airports post 9/11, acting on such an assumption should not be seen as 'irrational', but normative behavior within a social context.

Much has also been made of the role of rumours circulating on social media about this incident, and the singer songwriter Olly Murs got into a public spat with Piers Morgan after tweeting to his 7.83 million followers on Twitter that there had been gunshots in Selfridges. I would certainly advocate that the information disseminated in emergencies should be as accurate as possible, and that people with large numbers of followers on social media need to be careful with what they put in the public domain. However, I feel that it is a little unfair when people external to the event criticize those caught up in it for spreading inaccurate information, as they may have the hindsight that those within in it do not. It is also important to bear in mind that for rumours to spread in such incidents, they still have to be credible to be believed and acted upon by crowd members. One could say in the current context of fear of terrorist attacks in London post Westminster/ London Bridge, Parsons Green etc, that rumours of another attack could be considered a credible threat, especially since the authorities took the incident seriously enough to dispatch armed police to the scene. However, other less credible rumours (e.g. that Godzilla was charging up Oxford Street!) may not have been so readily believed. The crucial thing is for the authorities to be as open & honest as possible with the information they provide, so that people don't feel such a need to seek information about the incident from other sources. A common myth about emergencies is that if people become aware of a possible threat, then they will be come too fearful to act rationally and will therefore 'panic'. However, there is almost no evidence to support this idea, and withholding information in emergencies could even result in people delaying action to keep themselves safe, and so could ironically increase the danger. 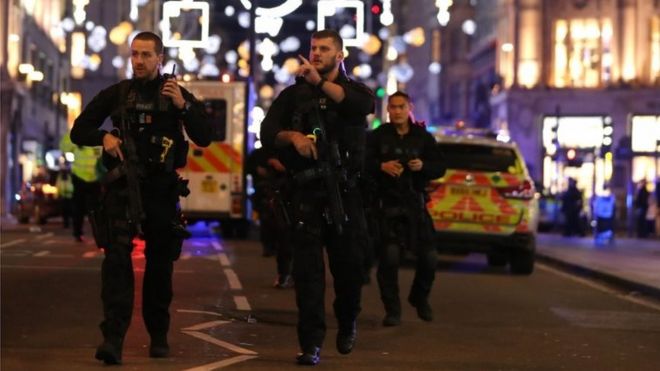 Finally, even when crowd flight does occur, during such incidents, it's wrong to describe them as a 'stampede' because this implies unthinking animalistic behaviour. The research that I have done on crowd flight (Cocking, 2013) has found that people still tend to behave cooperatively when they flee (e.g. picking up others that fall over, waiting for friends/loved ones etc). This seems to be supported by footage of people fleeing the incident, as they don't appear to be pushing others as they get away, and many are not even running at full speed, but walking quickly, pausing and/or turning round to see what is going on etc. While there do appear to have been some casualties (16 hurt and 2 hospitalized) during the evacuation, given the likely number of people that would have been in the vicinity at 16.30 on a Friday four weeks before Christmas, this would appear to be a relatively small number, and injuries in crowd flight are usually because of crowd density or people accidentally falling over, not because they are deliberately pushing others over.
So, to conclude, what we saw in Oxford Street this Friday, was not 'panic', and describing it as such is not only inaccurate, but also hinders detailed exploration of how we can safely manage such incidents in future.