Ferguson 'riots'- militarised policing is not the answer

The town of Ferguson, Missouri in the US has now seen ten days of almost nightly disorder, according to the latest BBC reports. This was sparked by the fatal shooting of the Black teenager Michael Brown, promoting accusations of racism by the African-American community against the police (Ferguson's population of 21,000 is two-thirds Black, but there are only 3 Black officers from a total of 53 in the local Police Department). The town currently looks more like a war zone than a previously unremarkable suburb of St Louis in the mid-West, with the media presenting images  that seem more reminiscent of scenes from apartheid South Africa. The recent deployment of the Missouri National Guard has not yet quelled the disorder either, with 31 protestors arrested during the night of 18/8/14 (there is also evidence that Amnesty human rights observers were told to leave the vicinity and did so with their hands up), and I would argue that this increasingly militarised response may well be one of the factors that is perpetuating the situation.

Militarised policing:
The police deployed in the evenings in Ferguson are heavily armed with a range of sophisticated weapons (such as: tear gas, sonic devices, baton rounds, and stun grenades) making them look more like soldiers than civilian policeman. What these devices all have in common is that they are indiscriminate crowd control weapons designed for dispersal that treat crowds in an indiscriminate way and cannot differentiate amongst protestors. In previous blog posts and an article for The Conversation, I argued that the introduction of water cannon into British policing would probably be counter-productive as it would contribute towards the increased militarisation of the police and could result in more disorder rather than less. This is in line with research done by a variety of academics into crowd behaviour using the Elaborated Social Identity Model (e.g. Stott, 2009) which argues that treating crowds forcefully and indiscriminately often escalates disorder, and was recently covered in a Newsweek article;

'Studies [ ] show that police have the power to either lessen the tensions of an angry group of people or goad them into a riot. This conclusion is based on the Elaborated Social Identity Model (ESIM), which is the leading scientific theory on managing a boisterous horde of people. What the ESIM shows is that an angry crowd can be driven to riot if they believe they are being treated unfairly—for example, by being confronted by cops decked out with military weaponry. When police treat a crowd justly and humanely, the chance of an uproar decreases and participants trust law enforcement more.' 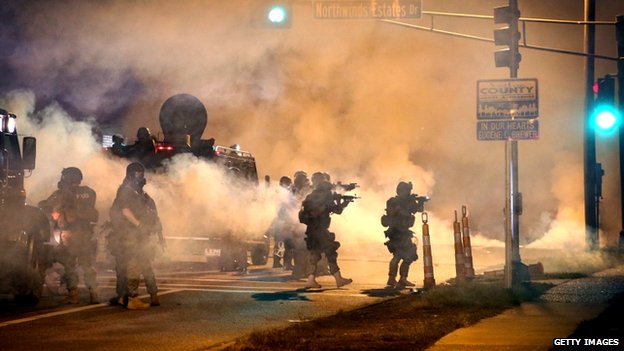 Irrationalist narratives of crowds:
I have also noticed that the language used to describe the protests in Ferguson reflects a pervasive mistrust of crowds in society that is heavily influenced by pathological  views of crowd behaviour (that are often flawed and not supported by current evidence). There are also commonalities with how protests were covered after similar events in the UK (such as the 2011 riots after the shooting of Mark Duggan by London's Metropolitan Police). For instance, the Ferguson Police Captain Ron Johnson claimed in an interview that;
"a small number of violent agitators... hide in the crowd and then attempt to create chaos"
I have seen no CCTV footage to support this assertion, but I would take issue with the premise behind this statement- that there are a small number of people with malicious intent who are responsible for 'inciting' the peaceful majority to behave violently. This assumes that crowd members are easily influenced by others to do things that they would not do otherwise. If crowds were this easily influenced by others, then why don't they listen to the police announcements to disperse and go home?! The reality is that the idea of gullible crowds, uncritical of any social influence is largely a myth not supported by evidence from studies of crowd behaviour. If violence does occur it rarely happens because a violent 'minority' has whipped up the the crowd, and is more likely because of the police treating the crowd in an indiscriminate way which psychologically unites crowd members to act together against what are perceived as illegitimate attacks against them. Ball & Drury's (2012) study of the narratives presented by the media and politicians of 'irrational' criminality after the 2011 riots in the UK, shows how the statistics used were often selective and/or mis-represented, and the conclusions drawn were not supported by detailed examination of what actually happened. Finally, locals from Ferguson also seem to reject this dominant narrative of pervasive 'criminality', and there have been much more positive accounts of recent events by those involved in them. For instance, the BBC has reported how some locals perceive an almost festival-like atmosphere in Ferguson;

Sarah from nearby University City has spent four days in Ferguson.

"What they're not showing in a lot of the media is how diverse these groups of people coming out are and how welcoming everybody is. It's really wonderful to be in this community right now. There's so much love and support."

Another man described efforts by young men to protect several local stores and the greater community from looters.

"People care about this community and the people who are looting are not necessary residents of Ferguson. They're opportunists," he said. "It's really really sad to see that people still want to take advantage of the situation and feel that it's right to loot. But one sin is not greater than another and ignorance does not justify ignorance."

The second statement to supported by the photo below (that is circulating on Twitter) that appears to show rival gang members (wearing different coloured scarves) standing together to protect a shop from looters, This also illustrates that protestors are placing limits on the crowd's behaviour, which also undermines another common myth of crowd disorder- that once riots begin, anything goes and 'mob rule' takes over. This fits with evidence from the 2011 England riots (Reicher & Stott, 2011) that found similar complexities in crowd behaviour, with non-police emergency services (such as fire-crews and paramedics) rarely being attacked by protestors, and when looting happened, it was often selective (and not indiscriminate) and some local properties were even protected from opportunistic looters by people who had previously been fighting the police. 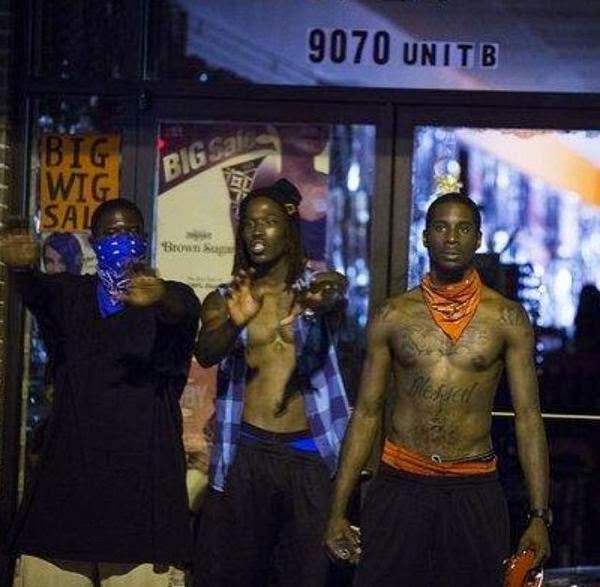 Conclusion:
The disorder in Ferguson is happening for a complex set of reasons, and I cannot claim to have all the answers to explain why such events occur and escalate. However, I'm pretty confident that such events happen in a social context which needs to be considered when looking at solutions (such as the deep inequalities in American society and how African-American communities often feel they are being victimised by a still predominantly white police force). Therefore, trying to de-contextualise such events by blaming the behaviour of a minority of bad-intentioned individuals, and responding to legitimate protests with increasingly militarised policing is not going to provide a solution. Furthermore, it can only further alienate communities from their local police forces if they are met with such overwhelming force when they take to the streets.
In a previous post I argued that disaster response should not be militarised (such as when National Guard soldiers were withdrawn from Iraq in 2005 and redeployed in New Orleans after Hurricane Katrina), as it was predicated on a fundamental distrust of crowd behaviour, and I would say similar issues are at play here.The US Police are probably amongst the most heavily armed police forces in the world, but this has not stopped urban disorder happening, and something is clearly badly wrong, when US citizens in 2014 are openly talking about their own police as an occupation force. The reasons why such events happen and escalate have to be explored in a broader social context and long term solutions will not be found by turning police forces into the paramilitary outfits we are currently seeing on the streets of St Louis.


Update 20/8/14:
Since writing the above post, there has been another tragic shooting by police of a Black teenager in Ferguson. So far, there does not appear to have been a repeat of the previous disorder, but it is clearly early days yet, and we shall have to see how events unfold. The BBC have reported that protestors have marched peacefully through the streets to protest against the latest shooting and 'hundreds of police were out on the streets, but kept their distance'. I believe this illustrates that disorder is not inevitable in the immediate aftermath of fatal incidents involving the police, and that what is crucial is how such tense situations are managed afterwards. In a previous post on disorder in the UK, I looked at two separate riots in Tottenham, London- both sparked by the deaths of Black people at the hands of the police (Mark Duggan and Cynthia Jarrett). I pointed out that after each incident there were delays in the disorder beginning (48 hours and 24 hours respectively), and that it was vital to look at how the police interacted with the community afterwards to understand how riots can begin in tense situations. Both situations involved forceful public order policing that resulted in angry (but peaceful) crowds becoming much more hostile to the police as a result of what they saw as indiscriminate and illegitimate police tactics that escalated the situation. I would suggest that how the police interacts with the community in Ferguson over the coming hours and days may very well influence whether the disorder continues or dies down.

References:
Ball, R., & Drury, J. (2012). Representing the riots: The (mis)use of statistics to sustain ideological explanation. Radical Statistics, 106, 4-21.
Cocking, C (2014) Dousing disorder or fatally fanning the flames? A study of the possible psychological and physiological effects of water cannon. Report for the public consultation into the proposed introduction of water cannon by the Mayor of London Office for Policing & Crime (MOPAC).University of Brighton, Feb 2014; Available online