Interesting accounts are emerging about what happened in the recent plane crash at San Francisico airport. The BBC have quoted a safety official investigating the incident who is reporting that evacuation was not immediate and was delayed by up to 90 seconds after the plane stopped. It also seems that the order to evacuate was only given after a member of the cabin crew saw fire outside the plane. It's unclear at this stage why there was a delay in evacuation (although apparently protocol can allow for such delays if it is decided as the safest course of action), but I think it highlights quite well the behavioural processes involved in such emergencies. To me it shows that social norms endure in such situations (rather than breaking down into selfish mass 'panic') because the passengers followed the instructions of the cabin staff and delayed their own evacuation until instructed to do so, rather than instinctively fleeing as soon as possible (as is often assumed in media coverage of such incidents).

I'm pleased to say that I've not yet seen descriptions of passengers' behaviour during this incident as 'panic' (although I'm sure there are some out there!), and this seemingly small detail shows quite nicely how describing such incidents in this way rarely matches up with evidence of what actually happens. Studies of human behaviour in fires (e.g. Canter, 1990; Drury & Cocking, 2007) have shown how the maintenance (and even creation) of social bonds and structures  encouarges successful evacuations in fires and other emergencies. In situations of uncertainty people can also look for guidance from others who have more experience on how to act in emergency situations. So, in the San Francisco plane crash, it seems that passengers waited for instructions on how to act from the cabin crew, and then exited the plane in what appears to be a very successful evacuation (so far there appear to have only been 2 fatalities- one of whom may have been hit by an emergency vehicle once they'd left the plane). Therefore, while such situations may very well be a highly stressful expereince for those involved, and any loss of life is a personal tragedy for the victims and their families, I feel we should remember that such incidents also illustrate the remarkable solidarity and co-operation that people affected can display towards each other. 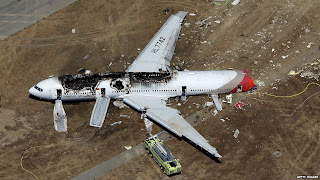 
Drury, J. & Cocking, C. (2007). The mass psychology of disasters and emergency evacuations: A research report and implications for practice. Unpublished manuscript. University of Sussex. Available on-line at; http://www.sussex.ac.uk/affiliates/panic/applications.html
Posted by chris cocking at 06:38