Differing views of legitimacy at March for England protest

Recriminations are playing out over the internet after the far-right group 'the March for England' (MfE) were escorted along Brighton sea front on St George's Day (21/4/13). It's the biggest single policing operation seen in the city for many years, with around 700 officers from at least 10 different forces present, and police quoted as saying the total bill will be "several hundreds of thousands of pounds". Estimates of those attending vary from 100-200 MfE protestors, and over 1000 counter-demonstrators who turned up to confront them. There were around 20 arrests reported, and there were sporadic clashes as MfE protestors sometimes broke free from the police cordons protecting them and were confronted by counter demonstrators. However, there were also clashes in the differing views of what was legitimate behaviour between the police and counter-demonstrators that illustrates the often deep divisions that exist in such situations & can promote distrust and/or conflict between the two sides.

Firstly, there is the issue of why such marches are even allowed to take place when they attract massive counter-protests and are incredibly disruptive to a community that does not share their views (it seems the vast majority of MfE marchers were not from Brighton, and came from elsewhere across the country). The march route along Brighton seafront was surrounded by a ring of steel, with either police, their vans, or metal barriers blocking all access to the route of the march (see photos below for examples). This meant that many sea front businesses had to close for the day and the streets of Brighton were full of disgruntled tourists (who may have had no prior knowledge of the protests) trying to find a way to get to the beach. The local paper the Sussex Argus reports on an emerging squabble between Labour Councillors and the Green council over whether there should have been an application to central government for the march to be banned. However, some of the more radical protest groups present felt that it was not for the authorities to approve (or disapprove) of political protests, and those who objected to what they deem as offensive views by others, should take to the streets and physically prevent such marches from happening.

All this presents a problem for the safe management of such events, and the police often claim that they have a duty to balance the priorities of 'lawful' protests, along with the needs of the local community. However, I think the police view such marches in a particular way which means that those who come to protest against them may find it difficult to trust them. For instance, there was a perception amongst some counter demonstrators that the police were not being even-handed with the two opposing sides, resulting in a common chant on the day of "Police protect the Nazis". This has been reinforced by some of the on-line Tweets I have seen since comparing the treatment of MfE marchers with the more negative treatment of counter-demonstrators, and the Argus has also reported that Sussex police paid for buses to escort MfE protestors to and from the march route. I have not come across any evidence that Sussex police are sympathetic to the aims or tactics of the MfE (I strongly suspect that they would much rather they didn't choose to march in Brighton!), but I think they are operating under a rather narrow definition of public order legislation and policing that results in them feeling that they are duty bound to facilitate such protests, even if they bring serious disruption to the community and consequent distrust from local protest groups.

Over the years I have noticed that the police are generally very keen on protest organisers contacting them in advance of planned protests to discuss proposed location, expected numbers etc. If people do not, then Section 11(1) of the 1986 Public Order Act, (POA) which  requires protest 'organisers' to notify police in advance of proposed marches, is sometimes invoked. However, I believe this section has often been misinterpreted by the police to conclude that if such notification is not forthcoming, then the whole protest becomes an 'illegal' event (a meaningless term if it has not been banned by the Home Secretary in advance) which then creates a climate where the police believe all people who attend are behaving 'unlawfully'. Such a conclusion was criticised in the HMIC report that was written after the death of Ian Tomlinson during the 2009 G20 protests in the City of London, which argued that police still have a duty to facilitate such protests even if the alleged 'organisers' may not have adhered to a rather minor subsection of the POA. I believe that the MfE organisers have approached the police each year for permission to march, but the counter demonstrators do not tend to do so as one coherent group, as they are composed of people from different political perspectives (and some may be unwilling to enter into a dialogue with the police because of mutual historical distrust). This may leave the police feeling pressure to facilitate such a march going ahead in the face of concerted opposition, as happened at last year's march. I believe that this is a problematic approach to take, not only because its legal basis is rather dubious, but also because those wishing to oppose such marches taking place in their locality will find it increasingly difficult to trust the police if they believe they are not being treated even-handedly. Such mutual distrust between police and protestors can only increase each side seeing the other's actions as illegitimate, which in turn could make conflict at any future events more likely.

Some links to reports and pictures from the day follow below; 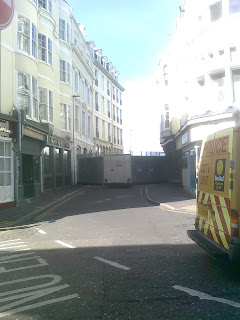 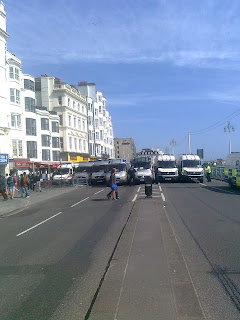 Examples of police cordons along the sea front 21/4/13
Posted by chris cocking at 07:12