Busy day today! Up at 6.30 am to see Olympic torch make its way through Brighton (photo below), followed by showing a poster of my research on mass emergencies at the Global Health conference at the University of Sussex; http://www.sussex.ac.uk/globalhealthpolicy/events/conferences2012.

Just seen more coverage of the Olympics security 'debacle' (as it is now officially called) where yet again reality is over-taking satire. It seems that the contractor responsible for security (G4S) can only give updates on a day to day basis of how many staff they have recruited, but so far, they only have got 4,000 out of the 10,000 they said they would provide, which does not bode well, given the Olympics are starting soon & athletes are arriving already.

Furthermore, West Midlands Police are being asked to provide nearly 400 officers a day to cover staff at Olympic venues in Coventry that G4S cannot provide, and a spokesman from the Police Federation was on the BBC's Newsnight, worried that they may be further stretched if asked to provide support to the Police Service of Northern Ireland to help during marching season, or if there is a repeat of last year's riots in the near future.

Maybe I should stop watching the satire programme Twenty Twelve & just stick to the news! 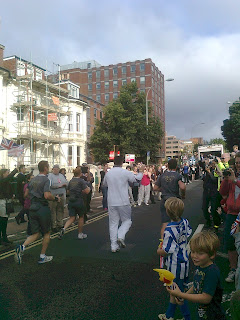