The Coronavirus has become a global pandemic and taken its hold in most countries, particularly in Europe. As I write this there are now over 150,000 confirmed cases of COVID-19 globally, with 1,140 in the UK, and tragically nearly 6000 deaths (although this figure will no doubt rise in the coming weeks and months). There are also plans to limit large scale gatherings and isolate the over 70s in the UK, and many European countries are already in lock-down, with flight and/or entry bans. In my own Higher Education sector, there have been moves to provide more online teaching and the University of Liverpool recently announced a ban on face to face classes, with other universities already following this lead. We are clearly facing a global health emergency not seen since the Spanish flu pandemic from 1918-1920, and so we need to take urgent and drastic action. In this blog I will explore why I think the current UK government's response is inadequate (and possibly based on selective and/or flawed interpretations of the scientific evidence), but also provide positive examples of how I think we can get through this crisis.

It has been reported that many UK scientists are critical of the government's current response to the crisis as it is putting more lives at risk, and nearly 250 have signed an open letter calling for the urgent implementation of stronger social distancing measures. There have also been discussions about concerns of  possible 'fatigue' in the public complying with necessary lock-down behaviours, and in a recent Twitter exchange with The Psychologist, myself and others questioned the evidence base for where such concerns have come from. There is also an open letter by behavioural scientists calling for more transparency relating to the evidence used to support this assumption of behavioural fatigue. As a counter-point, a classic study by Charles Fritz into disasters and mental health, found that civilian populations were remarkably resilient in the face of open ended threats- particularly the bombing of UK & German cities in WW2, and they never reached a point where they were no longer able to cope with the threat and the wider social fabric fell apart. It does also seem that the UK authorities have been rather selective in their use of evidence from social science, and a recent blog by Oliver Klein criticized their apparent over-emphasis on nudge theory (an approach introduced when David Cameron was PM). Nudge theory has been criticized by social psychologists (Mols et al 2015) as being ethically dubious (it subtly manipulates people to subconsciously change their behaviour), and also that social identity approaches would be more effective in encouraging compliance with positive health related behaviours by getting people to actively identify with the positive social norms suggested by appealing to the greater collective benefit.

Social distancing
There is an emerging consensus among the scientific community that stricter social distancing measures (such as those currently in place in Italy and Spain) are urgently needed in the UK- something I wholeheartedly support. On the face of it, social distancing may seem a little counter-intuitive to someone who created this very blog to highlight the social benefits of crowds. However, there are obviously very valid reasons for curtailing mass gatherings in the current pandemic, and many epidemiologists are calling for such measures to be taken to reduce the risk of transmission of the virus (a recent tweet Brian Cox highlighted the sheer illogicality of cramming people together for hours at US airports in a supposed effort to reduce infection). Previous evidence from the 1918 Spanish flu epidemic shows that social distancing can have a real effect in reducing mortality rates. Therefore, we need to consider how can we encourage a shared sense of identity and hence collective support in the absence of the face to face interactions you would see at mass gatherings. There are concerns about the possible negative psychological impacts of quarantine and self-isolation (see a recent review by Brooks et al in The Lancet), and Haslam et al (2018)'s work on the Social Cure also highlights the possible negative effects of social isolation. Therefore, it is vital to emphasize the importance of maintaining social connections when people are self-isolating, and this is where social media and other forms of online support can play a crucial role.  For instance, there are already various on-line community groups that have been set up to support people more at risk from COVID-19, such as this Facebook page for Brighton COVID-19 Mutual Aid, and below is a postcard that is being put through people's doors nationally to offer help.

'Panic-buying'
There have been numerous reports of people stockpiling goods especially toilet roll (which to the best of my knowledge won't help mitigate any of the symptoms of Coronavirus!), which has caused much speculation by the media and other commentators that this is irrational 'panic-buying'. I would say that while we clearly need to discourage stockpiling of goods, far from being an example of 'panic', such action is a classic example of a social dilemma, whereby what is in the individual interest (stocking up on goods before they run out) is not in the collective interest, as there aren't enough stocks in the supply chain for everyone to do this. Furthermore, those that are doing the stockpiling (eg those who are young, fit, and have the financial resources to do so) are less likely to be the ones who are most at risk from COVID-19. There are now calls for supermarkets to restrict some products, including this tweet from a retired senior police officer. Thankfully, these calls seem to have been heard, and supermarkets are now asking people to only buy what they need. However, as is depressingly common, the media still insists on reporting these situations as 'panic-buying', thus creating a self-fulfilling prophesy, as happened in the 2012 fuel crisis, and I made this very point in an interview for BBC Radio5 Live (my bit starts 21.40 into it). What the media should be reporting is the equally true (if not as exciting) message that if people only bought what they needed in the short term, then there would be sufficient stocks for everyone. The term 'panic' itself is also deeply problematic, as it doesn't accurately reflect what people actually do in emergencies, and myself and other colleagues have been arguing for years that the term shouldn't be used to describe emergency behaviour- see The truth about panic on the British psychological Society's web-page about Coronavirus. 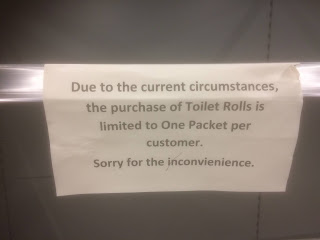 Notice to shoppers in Brighton superstore


Don't personalize, collectivize!
In The Psychologist online page on Coronavirus, John Drury and Steve Reicher argue that we need to collectivize the response to COVID-19 and this is best done by not appealing to selfish individual interests (will I survive?), and instead focus on broader collective interests (how do we all get through this?). This backs up a recent paper done in collaboration with colleagues involved in researching emergencies on how to advise planners to manage emergencies effectively (Drury et al, 2019).  One of the over-arching recommendations was that cooperation is more likely when people feel a shared sense of threat, and so we need to encourage people to develop a common identity in response to this threat (eg encourage the idea that we're all in this together and we need to cooperate to come through it effectively). There is historical precedent for this, and a recent article by Chris Creegan highlights the organisation and collective solidarity that emerged from the LGBTQ community in response to the AIDS virus, and how such solidarity is crucial in the current crisis;
'The key to all this — and the clue to how we survive a plague now — was community activism. However governments act, and they must, our way through this lies with all of us — in civil society. Whatever the necessity of ‘social distancing’ our need for social connection has been brought into the sharpest relief imaginable. We will get through this together.

So, I would like to end with a more positive message that I believe we can get through this crisis if we work together and don't compete with each other. I do not in any way want to downplay the seriousness of the COVID-19 outbreak, and I know that people will be fearful of losing loved ones (I am very concerned about my own family members who are in the high risk demographic groups). However, I think it is also worth remembering that most people (even those in high risk groups) will either not contract COVID-19, or make a full recovery, and that we will all get through this if we pull together. However, we do need to act collectively to overcome this crisis, as that will result in a much more effective response than if we act in more individual ways.