London saw another apparent terrorist attack on Friday 15th September- this time at Parsons Green Tube station in South West London, with 29 people injured in what must have been a horrifying experience for those affected. Mercifully though, it seems that the device failed to detonate fully, and so the casualties could have been much higher, with many fatalities had it exploded as intended, (given that the bomb went off on a packed tube train that can hold nearly 900 passengers during rush hour). The timing of the explosion was also fortunate, because it happened while the train was still above ground, and had it detonated fully while in a tunnel, the force of the explosion on the train and its occupants would have been much greater. So, while I wouldn't want to downplay the shock and terror that those on the train may have experienced, it looks like this incident could have been much worse.

'Stampede' or logical flight?
As with such incidents there has been blanket media coverage (including an interview I did for the BBC news channel on Friday evening), with terms such as 'panic' and 'stampede' being used liberally in both media and eye-witness accounts. For instance, BBC coverage describes a 'stampede' as people evacuated down the stairs. Those familiar with this blog will be aware that those of us who work in the field of emergency planning and response are critical of such terms, as they don't usually match up with detailed examination of what actually happens, but also because they imply that people in crowds behave selfishly and/or & irrationally. In the interview I did for BBC news, I made the point that it's not 'panic' to flee a potentially life-threatening risk, and in the current context (that this is the 5th major incident of its kind in Britain this year), it is not surprising that people rapidly fled as soon as it became apparent that there was an explosive device on the train. Previous research I have done (Cocking, 2013) has found that while instinctive crowd flight can happen (e.g. people run as soon as they see a crowd surging towards them), it is usually brief and people still co-operate with others during such flight, so the idea that people who fall over are then deliberately trampled by others as they flee is largely a myth.
However, there are also specific physical aspects of the incident at Parsons Green that need further exploration, as otherwise it is easy to  slip into using irrationalist narratives if one does not examine why certain things happened.  So, interviews with eyewitnesses include reports of people falling over each other as they evacuated down the stairs off the platform at Parsons Green, and it is possible that some injuries occurred this way (although we do not yet know how many and most of the 29 casualties appear to have been burns from the explosion). However, there are descriptions of people helping each other within the crush, and also mobile phone footage that people took of the bomb on train, so not everybody fled, and some people stayed on the platform. What happened as people ran down the stairs seems to be a crowd collapse, whereby a domino effect can happen in densely packed crowds (eg if someone falls over, then the physical pressure on those behind them means that they are forced over into the space created). This is what happened in the Bethnal Green tube station tragedy in 1943 (when 173 people died during a crowd crush as they ran down the station steps to escape an air raid), because someone fell over and others tumbled over them, creating a crowd collapse.

The incident on Friday could also have been exacerbated by some specific physical factors relating to where it happened. So, for instance, Parsons Green is quite an old Victorian station on the District Line (it was built in 1880 before the deeper tunnels of the London Underground were created), and so many of its stations are above ground (see photo below). Therefore, people had to evacuate downwards to get out of the station (rather than upwards, had they been at a station in a tunnel), and the effects of anyone falling over in such a downward fleeing crowd would have been made worse by the effect of gravity. Secondly, it seems from reports that the device went off towards the rear of the train, and the exit at Parsons Green is towards the front of the train. So when people evacuated, most would have probably surged towards this available exit at the end of the platform, meaning the crowd surge was denser than had there been more than one obvious way to evacuate (it seems that some people evacuated along the tracks, but much less than those that fled towards the exit at the end of the platform). 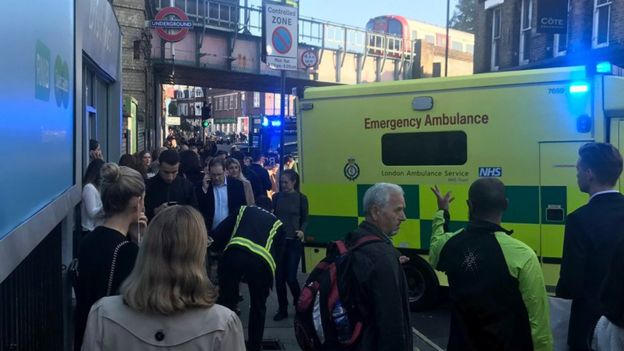 Conclusion:
Previous work I have done with John Drury into mass emergencies, including 7/7 (see references below), found that people often behave much more resiliently than is expected of them, and I think yesterday's incident at Parsons Green was no exception. Yes, there were factors during the crowd evacuation that we need to consider if we are going to help ensure that future incidents are managed safely. However, I would argue that these are usually physical and/or logistical aspects of the space in which the evacuation happens (rather than any inherent problems with the way that those affected behave en masse), and using irrationalist terms such as 'panic' or 'stampede' do not help us advance our crowd safety management approaches. Finally, it is also worth bearing in the mind the general sense of community spirit, spontaneous acts of co-operation and generosity shown by others that happens after such incidents. For instance, a local resident in Parsons Green offered to put the kettle on for anyone affected, and a local Pizza company gave out free pizza and water to members of the emergency services on the scene (see photo). I think these are good examples of how adverse events can help bring communities together, and not divide them (as is often the intention behind the perpetrators), and we should remember this positive message in the aftermath of such incidents. 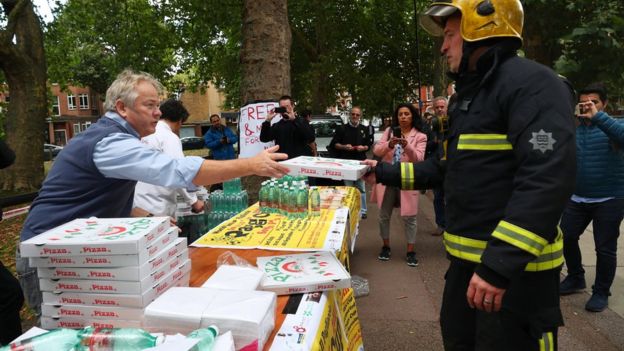 
Drury, J., Cocking, C., & Reicher, S. (2009a). Every one for themselves? Understanding how crowd solidarity can arise in an emergency: An interview study of disaster survivors. British Journal of Social Psychology 48.