The phenomenon of 'Black Friday' seems to have firmly caught on the UK with reports of scuffles in the stores that participated across the country, and Police in Manchester have criticised Tesco for not being adequately prepared to deal with the crowds that gathered from midnight to pick up bargains. This is something I have been asked about by the media when previous events have created crowd management problems (such as the Ikea 'riot' of 2005), and the questioning usually goes along the lines of;
'don't these incidents disprove your theories as they show that people behave competitively and/or anti-socially in crowds?'

My response is to say that the theories of crowd behaviour that I and others from my field use don't claim that people in crowds will always behave co-operatively and/or pro-socially, and they may even behave in ways that people today would find abhorrent (such as the racist lynch mobs that were common in the US before the 1920s). We would argue that the crucial factor in influencing a crowd to behave co-operatively or not is whether they have the opportunity to develop a shared sense of identity that can than lead to united action in pursuit of this common cause. The work I did with John Drury  into mass emergencies (Drury et al 2009 a&b) found that survivors of mass emergencies often reported a common identity with others in the crowd who may have been total strangers before the emergency began (eg 'we're all in this together'), and it was this shared sense of identity that meant that co-operative rather than selfish behaviour was often the norm in such situations.

What appears to have happened on 'Black Friday' however, is that far from encouraging co-operative crowd norms, people were instead encouraged to compete with each other. Such problems are exacerbated if stores open out of normal hours, and if any special deals are of a limited nature (eg 'the first 100 shoppers get a discount') as people can fear that they may miss out if they don't get there in time- which explains why crowd surges and even scuffles can break out in such situations. People behave in this way because they are being set in competition with each other, and there is much less of a chance for them to experience a shared sense of psychological unity. I explored a similar example of this when I looked at the fuel crisis in 2012, and I argued then that the media reporting people filling up their cars as 'panic-buying', as well as a government minister telling people to store petrol at home created a social dilemma, whereby people feared that if they did not stock up before others did, then they risked running out of petrol. However, this was what created the shortage, as there is not the capacity in the fuel distribution system for everyone to drive around with full tanks. What would have been an equally true (and more co-operative) message to present to the public would have been that there was sufficient fuel supplies & that they should not stock up if they didn't need to as that in itself could create a shortage.

So, I often find myself saying to the media that people don't necessarily descend into an 'irrationalist mob mentality' (a term I often hear journalists using to describe crowds) in such incidents, and that perhaps rather than asking why people can behave competitively in crowds, maybe instead we should look at ways in which we could encourage them to behave more co-operatively. I would argue that having events such as 'Black Friday' do not help encourage co-operative behaviour, and retailers should think very carefully about how they will manage such situations (or even whether they are justified at all) before advertising them. Furthermore, they need to take more responsibility for preventing the completely predictable (and often avoidable) crowd management problems that such situations can generate, rather than writing them off as examples of crowd 'irrationality'. 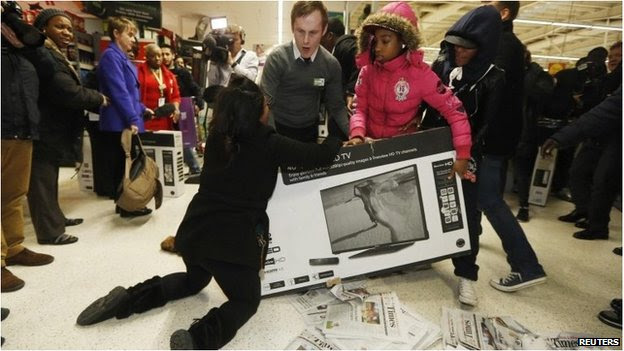 shoppers wrestling with staff for a new TV

Drury, J., Cocking, C., & Reicher, S. (2009a). Every one for themselves? Understanding how crowd solidarity can arise in an emergency: An interview study of disaster survivors. British Journal of Social Psychology 48.
Drury, J., Cocking, C., Reicher, S. (2009b). The nature of collective ‘resilience’: Survivor reactions to the July 7th (2005) London bombings. International Journal of Mass Emergencies and Disasters 27 (1) 66-95.