Today (19/12/13), the jury reached a verdict in the Woolwich barracks attack of May 2013, and perhaps unsurprisingly both suspects were found guilty of the murder of Lee Rigby. The British media (such as this coverage by the BBC) is currently full of details of this shocking attack in broad daylight in a quiet area of suburban London. Therefore, I will limit this blog to focussing on the responses of the bystanders who witnessed it, as I think they yet again show the amazing resilience and courage that people can exhibit when exposed to such horrific situations. Furthermore, the notion that bystanders will always be apathetic to others in times of need (a concept known in Psychology as the bystander effect) is too simplistic and not always supported by evidence, especially during serious and/or life threatening emergencies.

In previous posts, I have looked at how survivors and bystanders intervened to help each other during the 7/7/2005 London bombings, and the Westgate shopping mall attack in Kenya this September, and this also seems to have happened immediately after the attack on Lee Rigby. Ingrid Loyau-Kennett, a cub scout leader from Cornwall (who is on the left in the image below) witnessed the attack, and become famous for her subsequent intervention. In interviews for the BBC, and the Daily Telegraph newspaper, she describes how she initially tried to help Lee Rigby, but then also engaged the perpetrators in conversation to try and prevent them from attacking others, and even asked one of them to hand over his weapon. The image also shows two other female bystanders talking to the other attacker.What I think is also significant, are the bizarre instances of near-normality in the period between the murder and the arrival of armed police on the scene. One of the attackers asked a bystander to film him while he made a speech seeking to justify his actions, and this became the infamous video clip that went around the world in the attack's aftermath. The footage shows the attacker speaking to the camera about the murder he has just committed, with his hands soaked in Lee Rigby's blood, as people walk past him, seemingly oblivious to what has just happened. I think both of these examples illustrate the almost complete lack of any 'panicked' behaviour in this situation, and also contradicts the idea that bystanders always ignore people in need (as the 'bystander effect' would predict).

Conclusion:
The murder of Lee Rigby was a truly shocking and horrific attack that risked dividing communities and briefly created a revival in the flagging fortunes of the Islamophobic English Defence League. However, a piece in The Guardian today argues it  has instead had the opposite effect to that intended by the attackers (to start a 'holy war' between Muslims & non-Muslims) and united communities in their opposition to such attacks. I believe that the selfless and courageous acts by passers-by on the day were perhaps the first example of such opposition and show how people can unite and come together to support each other in times of adversity. 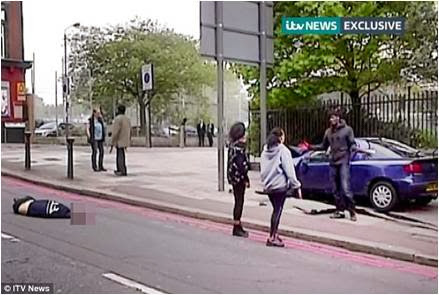